Number and tendency of its change: 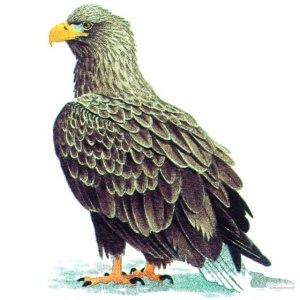 Orlan-belokhvost long time was considered as a look, very rare on nesting, in Belarus, especially in the southern half. Still in the early nineties to Polesia only 5 places of regular nesting of sea eagles were known. Meanwhile, results of accounting of 1998-2002 showed that now the main population of a look is concentrated in the southern Belarus where number is estimated at 50-60 the nesting couples. Undoubtedly, increase in number of the Belarusian population of sea eagles happened due to development by them of fish farms and reservoirs in the central and the southern Belarus. In the north of Belarus the number of a look remains stable (20-25 couples). Total number of a sea eagle-belokhvosta in Belarus makes 85-105 nesting couples. To Polesia where he is ordinary on average and the lower current of Pripyat, the average density of nesting makes 1 couple / 100 sq.km.

Major factors of threat:
- cutting down of the high-age woods
- recreational development of coastal zones
- injurious activity of ravens
- death of birds during the winter period
- shooting by poachers
- shooting by taxidermists

Protection measures:
The look is included in the Red List of Republic of Belarus since 1981. The known nests undertake under protection by regional structures of Ministry for Protection of the Environment and Natural Resources, around them security zones with a radius of 250 m Krom of more strict observance of the existing protection measures are established, they need to be added with construction of artificial nests which sea eagles willingly occupy; the organization during the autumn and winter period of fertilizer platforms by the calculation of carcasses of the fallen farm animals; a ban of land installation of traps at drives; more active promotion of protection of a look among the population. 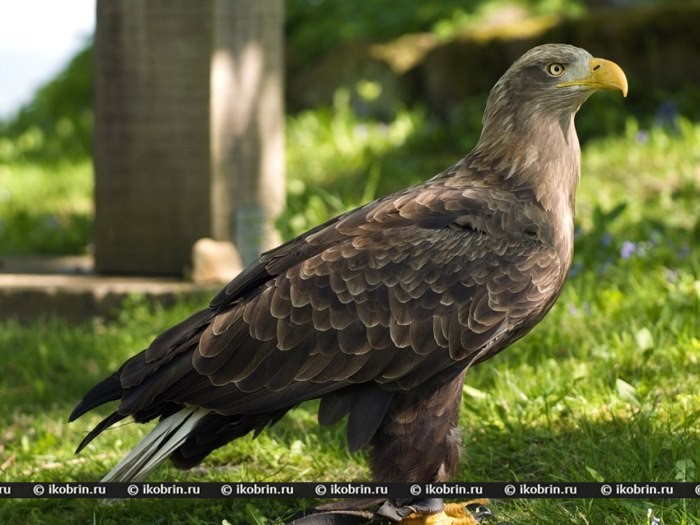 Description of a look:
The largest of the nesting birds of prey of Belarus: length of a body is 70-95 cm, wingspan of 200-245 cm, weight is up to 6,5 kg. Females are slightly larger than males. Coloring brown different shades, the head is much lighter, a tail purely white, slightly wedge-shaped, a beak massive, brightly yellow. Young sea eagles dark-brown, tail dark. There is a number of transitional age dresses.

Distribution:
The extensive area stretches from Scandinavia, the central and southern parts of Europe for the East through all Siberia to Chukotka, the Kuril Islands and northern part of China. In Belarus a look, extremely sporadically widespread on all territory, more usual in Pripyat Polesia.

Biology:
Nesting flying and tranzitno the migrating look. In the last decades some nesting couples keep on a nested site all the year round. In severe winters, for example in 2002/03, in the north of the country cases of death of adult birds from a beskormitsa were noted. Young and nepolovozrely birds widely wander, accumulating during the winter period at ryboproduktivny nonfreezing reservoirs or in other places with existence of considerable stocks of food resources, for example, in a zone of resettlement of the Chernobyl NPP. Directly on nested sites sea eagles are marked out from the first of February, and the otkladka of eggs begins with the middle of March. Sea eagles nest at distance from 200 m to 3 km from hunting reservoirs in pineries, at the edges of cuttings down among the mixed woods, on islands and capes among bogs, and to Polesia - in the inundated woods. Nests are under construction on pines, aspens, black olkha and birches at the height of 11-27 m. Long-term nests represent impressive constructions to 2 m in the diameter and the same thickness. Layings from 1-2 eggs appear in the second half of March - the beginning of April, the average sizes of eggs 73,8 × 55,0 mm. Baby birds hatch at the end of April - the beginning of May. Nests from the second half of June and until the end of July begin to abandon Sletki. On average it is the share of each successful brood on 1,3 sletka. In the north of the country the success of reproduction makes 79%. In a diet of sea eagles-belokhvostov in the north of Belarus in 1992-99 fish prevailed - 84,6%, followed further okolovodny birds - 11,5% and mammal - 3,8%.