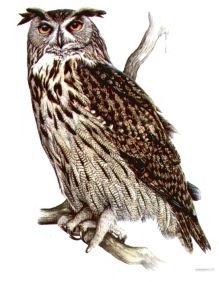 Short description. The largest of owls of world fauna. A bird of a dense constitution and with wide wings. Length of a body is 58 — 78 cm, wingspan of 150 — 188 cm. The mass of a male is 1,6 — 2,1 kg, females of 2,2 — 3,2 kg. On the head the bunches of feathers sent to the parties — "ears" are well noticeable. The plumage is friable, providing silent flight. The general tone of coloring ocherous-brown, with the numerous rusty-brown and black pestrina on the lower side of a body having both a longitudinal, and cross orientation, and on top merging in continuous gray-brown drawing. On a throat under a beak — a white spot. Legs densely operena to the claws. Eyes are big, their raduzhina reddish-orange; beak and claws black.

Distribution. It is widespread in Europe, northern, central and east parts of Asia. Belarus entirely lies in borders of an area of an eagle owl, but his distribution has very uneven character here. Territories with especially high density of population are in the Brest Region (Drogichinsky, Ivanovo, Ivatsevichsky, Luninetsky, Lyakhovichsky, Stolinsky, Pinsky districts) and in the west of the Gomel Region (Zhitkovichsky, Lelchitsky, Petrikovsky districts). On the other hand, the eagle owl completely is absent as the nesting bird near big cities and in some agrarian regions of the West, the center and the East of Belarus with insignificant areas of the woods, bogs and reservoirs. 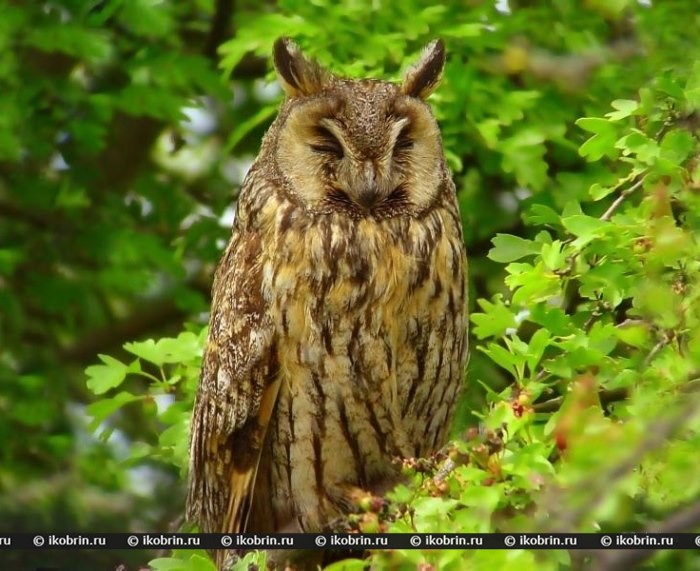 Habitats. Inhabits various habitats with the crossed relief, with alternation of sites of the wood and open territories, generally in the presence of reservoirs of different type. The most preferable habitats are regional zones of extensive floodplains, and also vicinities of large complexes of fish-breeding ponds.
Biology. Gkezdyashchiysya, settled look. It is active in twilight and night time of day. The prenested peak of voice activity falls on February — March. Birds during this period make loud characteristic sounds ("hoot"), audible at distance of several kilometers. Nests in the places which are seldom visited by people. The nest arranges on the earth (near komlya a tree, a stub or vyvorotnya) or occupies nests of birds of prey and storks on trees; nesting in the thrown constructions or in spacious hollows of old trees is in rare instances noted. The nesting case under the small bridge via the meliorative channel is known. Eggs in nests appear usually in the second half of March, at some couples even at the end of February. In a laying of 2 — 4 white eggs the sizes on average 58,6 x 48,0 mm. The laying is nasizhivat by a female within 34 days; the male and in the first weeks of life of baby birds delivers all this time to a nest of sterns. Later also the female begins to bring production. Still badly flying, at the age of 5 weeks baby birds leave a nest, but for a long time are fed up by parents. The range of forages is very wide — from mouse-like rodents and small birds to a hare and a heron. In winter time in food small mammals (in particular, the water vole), in the summer — the average size of a bird prevail (ducks, sandpipers, vranovy, owls, etc.).

Number and tendencies of its change. The modern number of the Belarusian population is estimated at 400 — 500 couples [1] that makes about 4% of number of a look in Europe. Probably, noticeable reduction of number happened in I960 — the 70th years. Now number is rather stable. The highest density of population in optimum habitats makes 2,1 — 4,3 couples on 100 sq.km. On other sites of dwelling density of nesting fluctuates within 0,1 — 1,4 couples on 100 sq.km.

Major factors of threat. Shooting of adult birds by hunters (the opinion on harm of an eagle owl continues to occur in hunting grounds) and taxidermists (the eagle owl is very popular object of commercial taxidermy), and also death of nests, including during spring cabins of the wood. The case of death of an eagle owl from defeat for electric current on a support of the high voltage line is known [2]. Overdue spring with a late descent of snow cover and spring snowfalls (in such conditions many couples do not start reproduction) also negatively affect the number of population of an eagle owl.

Protection measures. The look is included in the Red List of Republic of Belarus since 1981. Acceptance of special measures for maintenance of steadily existing nested groups is necessary: a ban on spring cabins near nested sites, the prevention of casual shooting of birds during autumn and spring hunting. Rigid control over private taxidermy and a zoological collecting is extremely necessary.