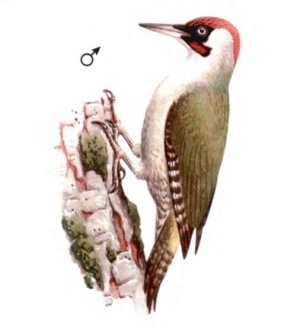 Short description. Large woodpecker. Length of a body is 33 — 37 cm, wingspan of 50 — 55 cm, mass of 186 — 250 g. Differs from other woodpeckers in bright yellowish-green plumage. The back is olive-green, to a nadkhvostya it is brilliant - yellow. The belly party pale green, it is rare with inexpressive dark pestrina. Top of the head and nape red. From a beak, on each side the heads are excreted black "moustaches". At a male on "mustache" a red spot. Coloring of young people lighter, pestrina numerous, accurately expressed.

Distribution. The area of a look covers almost all Europe (except Ireland), northern, western and Asia Minor, the Caucasus, Iraq, partially Iran and Turkmenistan. The nominative subspecies inhabit the most part of Europe. Though the territory of Belarus completely is in look area limits, is widespread very unevenly, occurrence is higher in the southern half of the republic. Winters within a nested area.

Habitats. Lives in the long-boled deciduous and mixed woods, preferring their clarified and rarefied sites. Meets in the broad-leaved and pine and oak woods, oak groves, birch forests and aspen forests, sometimes in old boggy alder thickets, the fir-tree and deciduous woods more often, avoiding pure fir groves. Prefers to lodge in the mosaic forest stands alternating with open sites (glades, glades, small meadows, cuttings down), and even in separate groups of the high trees located among open spaces, especially in valleys of the big and small rivers. Does not avoid plantings in a cultural landscape, for example, forest-park and park massifs, in winter time appears in the cities. 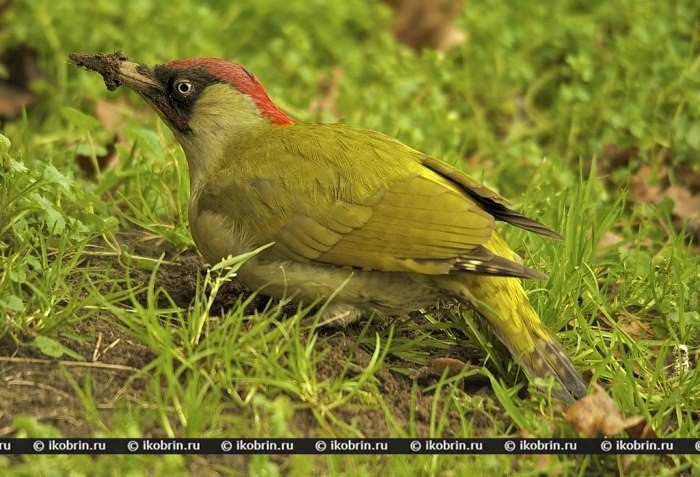 Biology. The settled look, in winter time wanders. Shezdovy couples settle far one from another. Loud characteristic marriage shouts in the form of the peculiar laughter reminding neighing of a horse, and much less often a drumbeat are heard in the middle of April — the first half of May. Nests settle down in hollows of mainly deciduous trees, usually at the height of 2-5 m, is frequent to 8 m, occasionally above. The tray of a hollow has correct roundish, sometimes almost elliptic form. The bottom of a hollow (nest) is covered by wood dust. Starts nesting in the first half of May. The laying consists from 6 — 7, sometimes from 4 — 5 is brilliant - white, the correct oval form of eggs with average sizes of 31,83 x 23,14 mm. Habitual layings meet to the middle of June. Nasizhivaniye proceeds within 17 — 18 days. The departure of baby birds occurs in the second half of June. In August movements begin. In the fall and in the winter together with creepers, nutcrackers, motley woodpeckers flies in gardens and parks. Eats wood and land insects, in particular, as a favourite forage serve different types of ants, their dolls and a larva.

Number and tendencies of its change. One of the most rare woodpeckers of the republic. Number everywhere low. It is estimated at 3000 — 5000 couples. Observed some decrease in number in 1970 — the 90th years probably continues and now.
Major factors of threat. Cabin of the high-age deciduous woods, replacement of uneven-age mosaic forest stands with monotonous coniferous plantings, sanitary cabins and cabins of leaving. Growth of recreational loading in suburban forests accompanied including reduction of number of ant hills.
Protection measures. It is included in the Red List of Republic of Belarus since 1993. Against detailed mapping of characteristic habitats of a look and capture under protection of its key habitats, the regulation of cabins of high-age, uneven-age mosaic forest stands, broad application in forestry of practice of natural reforestation is necessary.