Mole ordinary
On appearance and a way of life it is similar on other presents mole. Length of a body of its 12 — 16 cm, a tail — 2 — 4 cm. At the majority of the small animals inhabiting a midland of Europe before very small as the poppy seed, an eye is available a narrow cut of skin about 0,5 — 1 mm long though there are no mobile eyelids and eyelashes. At the majority of moles of the Caucasus eyes are hidden under skin. On the Ukrainian Carpathians and in the Caucasus moles at whom one eye was closed by skin met, and against another there was a small cut. 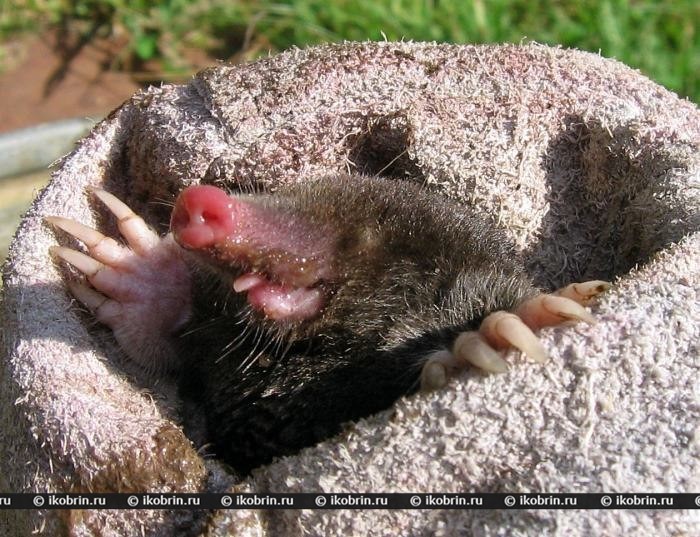 Mole (one of this word call only European, or ordinary, a mole) — the typical inhabitant of the deciduous woods and valleys of the rivers with meadows and deciduous trees. On valleys of the rivers the mole gets to the North to an average taiga, and to the South — to typical steppes though on water separate sites of a taiga and dry steppes meets seldom, and in semi-deserts, deserts, forest-tundras and the tundra does not meet at all. The mole carries out all life in the dark, not connected with a surface courses laid in the different horizons of the soil. In the friable and damp forest soil the horizontal near-surface courses located at a depth of 2 — 5 cm are laid. At their laying the mole lifts a course ceiling in the form of noticeable outside of the earth roller. Emissions of the earth at the same time do not happen.

On open (not forest) sites where the soil often and deeply dries out, the courses settle down at a depth of 10 — 50 cm from a surface. The mole cannot lift a layer of such power therefore surplus of the earth throws out through temporary otnorka on a surface in the form of characteristic small small groups — krotovin. When it is necessary to push the earth far, the mole corks an otnorok with the earth, and at the end of the course digs a new otnorok and through it throws out other krotovina. The chain krotovin approximately corresponds to the direction of the deep course. The deep courses under forest tracks through which, as underground bridges, connect among themselves the most difficult systems of the near-surface courses have special value. Promysloviki-krotolovy almost all the traps (krotolovka) put in transitions under tracks. In one transition in a week extract up to ten and more moles. Each adult female suits difficult system of the ring and radial courses around the nested (vyvodkovy) chamber located at a depth of 1,5 — 2 m of Krotovina over system prignezdovykh1 the courses is especially big, up to 70 — 80 cm high. In the winter moles quite often lay the subsnow courses on a soil surface among the herbage covered with snow or in the thickness of a sheet laying.

Moles eat soil invertebrates among whom earthworms prevail, in smaller quantity eat pochvoobitayushchy insects and their larvae. For once the mole eats up to 20 — 22 g of earthworms. The whole or broken-off worm the mole eats since the end, holding it with paws and clearing of the earth both paws, and foreteeth. Having sated, the mole twists the head and hinder legs under a belly, gets a form of a black velvet sphere and falls asleep for 4 — 5 hours. Having woken up, he begins to run and rummage in the earth, expressing strong indications of hunger. Roentgenoscopic it is established that the portion of food is digested in an organism of a mole on average in 4 hours. Digestion speed also defines a daily rhythm of activity of a mole. For 5 — 6 meals the mole eats about 50 — 60 g of a forage a Day that there is a little less mass of the small animal. Hungry the mole can remain no more than 14 — 17 hours. The phenomenon is established unexpected, from the point of view of normal physiology, that in the summer the need for food of moles is higher, than in the winter though winter decrease of the activity and hibernation at them does not happen. In habitats of moles for many weeks and even months it is possible not to see any svezhevybroshenny small group of the earth and any svezhepodnyaty roller of the near-surface course. Means, moles find all mass of a forage only in earlier laid courses day by day. It follows from this that earthworms, it is active also in a large number, creep in the mole courses. Here they are attracted by a smell of the mole musk to which worms show positive hemotaksis, or a little more high temperature of air in a course cavity, than in the layers of earth surrounding it or maybe that and another. Anyway, but the mole course for earthworms represents a trap with an odorous or thermal bait.

In the early spring moles copulate. The period of pregnancy is definitely not determined and can make from 30 to 60 days. Blind, naked, helpless cubs, in number 3 — 7 (to 9), will be born since the end of April to the first half of June. Normally in a year there is one issue. The young growth grows very quickly: at monthly age young people by the sizes already almost do not differ from parents. But maturing of females comes only by next spring. Young moles live among themselves peacefully, caress, making the gentle sounds similar to peep of a little chicken-pukhovichka. But in process of maturing they become pugnacious, and young males begin to show pugnacity earlier. And adults everything are unaccomodating, especially in the conditions of bondage. Adult males gnaw the females placed to them and young people. And adult females gnaw the placed young people. The mole eats the relative Zagryzenny to death, leaving from it one skin. B to bondage moles willingly eat meat of other moles. At the same time many wild animals of moles do not eat. At unaccomodating character the grown-up young growth is forced to be moved from a maternal site of underground constructions, to look for the site which is not occupied by other moles. Therefore the grown-up young moles show considerable mobility. It is established that the banded moles, especially the adults carried from the place of initial production for 700 m and who are let out in other course came back home, to that place where in the beginning were got. Also overcoming established facts the banded moles of mountain small rivers — Shaytanki and Mazara (on Central Ural Mountains). Excavation showed that the short otnorka which are openly terminating at water depart from the courses laid parallel to a water urez. Quite often opposite to otnorok in one coast are available same in another. Under a bottom of small rivers of the mole courses it was not revealed, so moles overcame the small river by swimming. The Ural okhotniky-krotolova saw the moles crossing even small rivers more than once.

Frequent movements on the close courses and inevitable touches to their walls result in fast wear (deletings)) indumentum. Therefore moles have not one and not two, as at many other animals, and 3 or even 4 molts in a year. The best fur - high, equal, dense, velvety and brilliant, coal-black — happens to a silvery raid at moles since the end of October - in November, after end of a full autumn molt. In process of a snashivaniye of fur its coloring and quality change. From April to June at first females, then at the wintered males have a change of worn winter fur with low, but dense and equal spring fur which keeps only to the middle of July when at adults the summer molt begins. At the end of July - the beginning of August also young small animals for the first time begin to fade: The summer molt almost without interruption passes into an amicable and full autumn molt. So, almost all warm season at moles goes full or partial change of indumentum. Places where there is a change of hair, act on an inner side in the form of black iyaten. Skin on a dark (Lynn) site of time in three to thickness, than on next, light, but a dark site rykhly, and hair keep on it unsteadily (are quicker wiped).

Linny spots reduce fur quality of a skin. Skins of moles small, but strong. From 20th years of the last century trade of a mole began. On mass character the mole ranked high in preparations of furs, and in neotory areas of the European part of Russia steadily wins first place, the principal value of a mole is defined by the Value of skins.