Fox
Fox — a widespread animal in our country. Earlier the fox was considered as a harmful animal. Out of ignorance and now still some hunters in every way try to ruin the found fox holes. Now the fox is recognized as a useful animal who is subject to protection. Of course, the fox will not miss an opportunity to crush the stood gaping hare, to catch a teterka or a partridge, to ruin a bird's nest, and also to profit poultry. However this harm is very small in comparison with the benefit brought to economy by an animal. 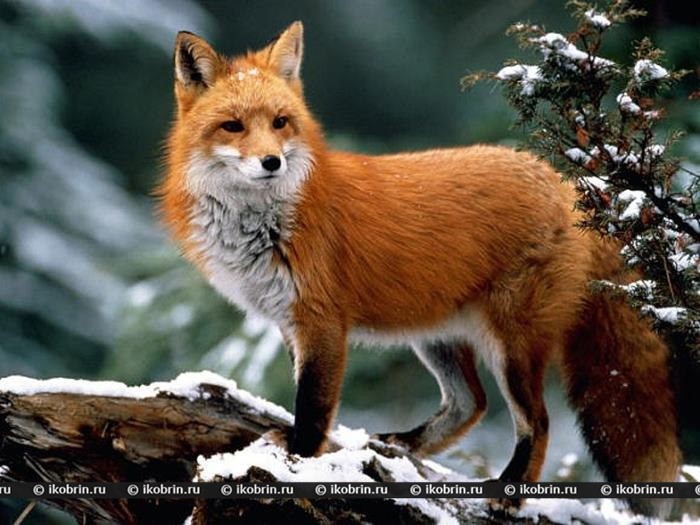 Almost on all territory of the country of a fox are fed mainly with the voles, mice, gophers and other rodents causing damage to agriculture. The considerable advantage is rendered by a fox and to our woods, exterminating the worst enemies of forest riches — may-bugs for whom with passion the growing-up young foxes hunt, eating them in a huge number.

Fox — a small harmonous and dexterous predator from family dog. The fox very easily adapts to various living conditions. She occupies the most various grounds. It is not enough foxes and in those districts where there are a lot of wolves as wolves cruelly pursue foxes, in particular if capture them on drop or on the drive.

There is a lot of foxes in those places where there are more favorable conditions for reproduction of their main forage — mice, voles and other rodents and also where on a cross-country terrain with bushes there are a lot of the hidden places for holes. There will be few foxes where it is difficult to dig holes and also where fills in holes with water (even despite abundance of a forage in these parts).

The fur of a fox of different districts strongly differs both on awn length, and on color, density and other qualities. Color of fur of foxes generally varies from red color of different shades of the foxes pyralids living in forest districts to gray color of foxes-karaganok — inhabitants of the southern steppes.

In northern part of the Urals, in the Komi Republic, in the Far East foxes of a great value meet: black-brown, mud divers and sivodushka. Coloring of the foxes living in the north, more colourful and bright than at inhabitants of the southern steppes.

And the best on quality of fur foxes of the Far East and Kamchatka are considered the largest. On quality of fur (its density, softness and coloring) all subspecies of the foxes living in borders of the CIS are broken into thirty seven ranges. Each range corresponds to a certain quality of a skin and its size, splendor, softness, coloring and value owing to what the cost of skins of foxes of different ranges various.

Before, when the fox was carried to number of harmful animals, custom of foxes to move led by a female hunters used group. Having noticed a female, they broke and a shot dispersed foxes in different directions, and then, having quickly passed sideways a trace of a female of kilometer two and having hidden behind any shelter, waited and beat males who, having returned on that place from where they were driven away from a female, hurried to catch up with her on a trace and got under a shot.

Now this type of hunting does not practice as usually hunting term by the period of reproduction of foxes expires and shooting of animals is forbidden. The beginning of a techka at foxes depends on the area of their dwelling and on weather conditions of winter. In the south of the country the techka usually begins in the middle of February, in the north — almost one month later.

After fierce fights with rivals males the strongest lisovin copulates with a female. Upon termination of a techka of a fox disperse. By the end of pregnancy which lasts fifty one-fifty two days at males the fatherly instinct wakes up. They begin to search for pregnant females and again cruelly fight with other lisovina for the right to remain about a female.

Having dispersed the rivals, the strongest lisovin remains about a female and shares with her all burdens on education of young young foxes. He helps a female to dig a hole, drags it production during that time when it it is desperate is in a hole with newborn young foxes.

Young females bring from three to five puppies, at old usually there are seven-nine puppies. Young foxes will be born blind people, with the closed ears, but strong, are covered with a fluffy brown hair, white on the end of a tail. By 20th day of life young foxes already look, wool on them turns yellow, and they begin to get out of a hole. Mother permanently is at young foxes, training them to disappear in holes at the slightest danger. The father diligent drags at this time him all edible that only gets to it into teeth, starting with a frog and finishing drop. To a male any more not on forces to support quickly growing up young foxes, and the female begins to help him with it. Parents bring to young foxes of live mice, birds and small animals, training young foxes to kill and break off production.

By August young foxes grow so that can independently live, and by their November already on wool and even on growth it is from a distance difficult to distinguish from old foxes. At one-year-old age the fox is already capable to reproduction.

Foxes lead generally a nocturnalism, but meet also such which sleep at night, and are fed in the afternoon. These foxes as show their traces, are interested in mice a little, and carefully examine secluded places in which hares like to lay down per day. Hunting for such foxes is difficult and has casual character as animals are in the movement all the time. It is possible to tighten them in a circle flags seldom, and under hounds dogs they leave far and not always take a detour.

The fox is omnivorous. She eats fruit (apples, pears), accurately removes raspberry from a bush, choosing the ripest berries. During rutting tears off and eats the dogrose which remained on bushes, later — kidneys and escapes of a pine. Catches fish on the shoaled places, does not refuse frogs and lizards. Destroys in a large number of grasshoppers, dragonflies, various bugs, May cockchafers and their larvae. In the south takes great interest in destruction of a locust which eats during its emergence. Eats sometimes birds who nest on the earth, and their eggs. Digs out nests of bumblebees. Catches and eats various small animals whom it can overcome, up to kids of a roe if they are badly protected by mother. In the winter the fox willingly goes to drop, and at night roams about boondocks of villages, rummaging in slop garbage. Sometimes catches hens and other poultry. But nevertheless the main food of a fox are mice and voles whose remains all the year round can be found in her dung. All other types of food of a fox have seasonal nature.

Fruit, berries and bugs (and also nests of bumblebees) do not meet in the winter, the majority of birds flies away. The gophers, hamsters and jerboas who were often serving in the summer by production of a fox sleep deeply underground in the winter, and only mice and voles are all the year round available to it. In bondage, even at abundance of meat, a fox willingly eat carrots, the crude peeled potatoes, drink milk.

As soon as young foxes grow up, they begin the hunting excursions about a hole, hunting bugs, grasshoppers and lizards. For the night they come back to a hole where parents continue to bring them regularly food. Having destroyed and having scared away all live around the hole, young foxes are forced to broaden the area of the actions.

By August young foxes can already independently hunt mice, small animals and a game. They can be met for kilometer and more from a hole at this time. To spend the night they do not come back to a hole any more. In the fall and in the winter they disperse and lead lonely existence until a techka when they start over again finding each other. Late fall, when the fox passes generally to food by mice and voles, the area of her hunting increases. Usually it is equal to a circle which radius not less than 5 — 6 km. Depending on quantity of mice the fox can in a night napetlyat on this circle so many traces that on a straight line they will make a distance to 50 km. The fox perfectly knows the area, all the and barsuch of a hole in it which it uses minutes of danger.

Usually output hole of a fox has three-four an otnorka, is very skillful and reserved located. They serve a fox for flight from a hole during danger. One of otnorok which the fox constantly uses for an entrance and an exit is swept well up from a distance as before it there is a platform from sand formed from long-term expansion and cleaning of "copper" of a hole.

The grown-up young foxes play on this platform, here they eat the production brought by parents. Walls of it an otnorka shine, it is much higher and wider than others. Such otnorok at hunters is called "main thing". The fox output hole has several otnorok directed in different directions to the Earth's surface from so-called "copper" — expansion underground at the end of the main thing an otnorka where the fox brood is located. Depth of fox holes is from 1 to 3 m.

In old holes the fox sometimes lives with a badger in one hole. Main entrances at a fox and a badger happen from the different parties. The dog let in a hole from outside where there lives a fox never jumps out in otnorka where the place taken by a badger is located. Obviously, the badger digs in all messages underground conducting in a hole of a fox.
Very seldom fox broods can be seen in low hollows of the big oaks and lindens having the course from the Earth's surface.

In districts where production of a stone is made, foxes willingly use the old, thrown, semi-fallen off pits for a young growth brood. In the winter the hunter finds holes of foxes directly on traces. In autumn time he surveys ravines and other places, suitable for broods of foxes, and also interrogates locals and shepherds. The shepherds who are well knowing the area willingly specify places where there are holes. Local hunters as they are dug out in the spring or in the summer when hunters are not in hunting grounds sometimes do not know about existence of some holes even.

In the district with the deciduous woods where few vyvorochenny trees and boulders, during wet weather, so-called "thaw", and also in steppes and fields in long rainy weather, during a sleet of a fox sit out in holes in the afternoon. At this time it is the best of all to hunt them with norny dogs. If the hunter knows many holes and dogs at him are well trained, he is expected by successful hunting. Ruin and damage of fox holes are strictly forbidden.