Roe
Deer of the small or average sizes; height in shoulders to 93 cm, the total length about 120 — 140 cm, weight is up to 59 kg. The trunk is rather short, the back part is slightly thicker than a lobby. Legs are long, lobbies are a little shorter than back. The head is short, strongly narrowed to a nose, but rather wide in eyes. The naked space on a nose is more, the top part it over nostrils a straight line. Large ears, about 15 cm, approximately in 2/3 lengths of the head, an oval form, with the conic rounded top. Eyes are big, pupils slantwise put. The neck is long, at males is thicker, than at females, but there is no mane. The back is inclined forward, the sacrum is higher than a nape, the back a little sloping. The tail is rudimentary, hidden in hair. Hoofs are narrow, rather short. Lateral hoofs are half shorter. Plusnevy glands big, around them a small pillow of long hair; pre-orbital small, not functioning. Horns are rather small, more or less liroobrazno raskinuty, with three shoots, rarely it is more. Nadglaznichny is absent, average is directed forward, top bifid. The main trunk is bent at an average shoot back. A horn in section roundish, in the main part there are a lot of hillocks; the socket is big. Females hornless. Rather often different uglinesses in development of horns meet: uneven formation of the right or left horn, reduction and increase in number of shoots; formation of "helmet" — the shapeless outgrowth covering all top of the head is sometimes observed. 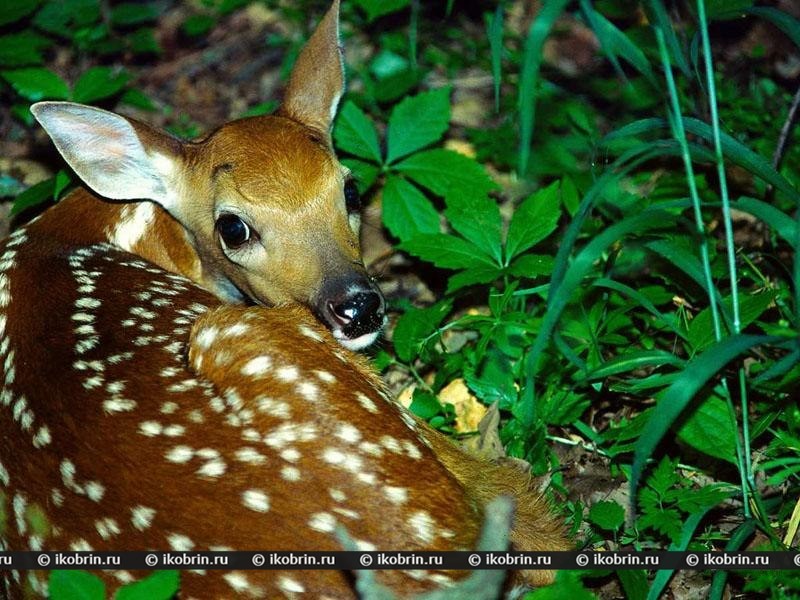 Both floors on coloring are quite similar. Coloring of adults one-color, in the winter gray and gray-brown, sometimes grayish and red, behind more darkly, especially on grain, a bottom is lighter. The mirror is small, white or light-reddish. Extremities reddish or red. The head to several Bureya trunks, on a lower lip a big black spot, a nose circle black. Summer fur evenly red, the mirror is poorly planned. Young people — spotty. The main background at them reddish, with age (at two-three-months) darkens, then brightens again. Spotty drawing is located in three strips from each party, the fourth is sometimes poorly planned. Two averages last from a nape to the back, the others from plechy. In the field of a basin two more strips are formed. Spots in size approach diameter of an eye, white

In March or April the rare summer awn begins to grow up and the underfur drops out. After that the winter awn — from a muzzle and extremities to a back drops out. The remains of winter wool remain sometimes until the end of June. Soon after that grows very thin and wavy underfur. At the end of July or the beginning of August gray winter wool begins to grow. Since August summer wool gradually drops out. The underfur then becomes empty and long, acts from a short winter awn, and the animal becomes fluffy At last, grows an awn which hides an underfur. The molt at the end of September — in October comes to an end. Terms of the beginning and end of a molt fluctuate on local conditions, depend on age and a condition of an organism, are not identical at a male and a female. Coloring sharply changes on seasons, in connection with wear of fur. By spring gloss is lost, coloring becomes more opaque and light as the ends of hair are upholstered.

Traces are small; at males roundish, dulled, at females extended and pointed. Prints of lateral hoofs are visible only on soft soil.

The roe is widespread in our limits from the West on in a drain very widely, but in the center of the European part of the country exists having rummaged in once continuous area of dwelling. In a zone of the real steppes, semi-deserts and deserts the roe is absent on landscape conditions of dwelling.

The roe is widespread in Baltic, in Belarus and in Ukraine. On the East reaches the western parts of the Leningrad region, Smolensk and the Voronezh region, but already in the form of the separate centers of distribution. After noted break the roe meets to the east from Volga, in Cisural area again. In the south it is found in forest part of the Crimea and in the Caucasus, excepting steppes of east Transcaucasia. The northern border of distribution of a roe passes a little to the south of Tobolsk and Tomsk in Siberia, to the north of Krasnoyarsk and passes 60 °C. highway in Yakutia, reaching the rivers Vitim and Aldan. The southern border passes in Western Siberia approximately 49 — 50 °C. highway, and in Eastern Siberia reaches borders of the country everywhere, bypassing only steppes of Transbaikalia from Altai to the Tarbagatai, and proceeds to the southwest to mountain System Tien Shan, on the South to the Alay and Gissar ridges.

In the CIS the roe forms three subspecies.

The European roe, lives in the western part of the European territory of the CIS and in Transcaucasia. The sizes are small, body length about 145 cm, height in shoulders about 80 cm, a skull of 19 — 21,6 cm, weight is up to 41 kg. Horns are small, poorly raskinuta, with small hillocks, in the bases are pulled so together that sockets almost concern each other. In summer fur hair wavy, slightly curly. Head top gray or brown, differing from other coloring markedly.

The Siberian roe, inhabits the North Caucasus and all other Asian part of an area, and also Zavolzhye and Cisural area. Differs from European very markedly. The sizes are average; body length about 140 cm, height in shoulders to 90 cm and more, a skull of 21 — 25 cm, weight is up to 59 kg. Horns are rather big, widely placed, very strongly covered with hillocks. In summer fur a straight hair, the head of one color with other body.

The Far East roe, has reddish winter fur and chestnut summer, besides she slightly more small than other Siberian roes.

Roes are found only in shrubby young growths. They live both in mountains and on the plain, in a zone of the wood and a zone of the steppe, but always where there is a bush. Especially often meet in strongly crossed and hilly districts. The continuous woods are avoided, keep on their suburbs. Are more characteristic of the forest-steppe.

Way of life. Rutting and a techka happen in August and September, sometimes slightly earlier or later; in mountains always later, than on the plain. Males are very angry at this time; search for a female usually on a trace; having found it, continuously drive, often beat; sometimes send two-three. Often fight with each other. Pregnancy continues about nine months. The oosperm remains almost without changes within 4,5 months, and only in December the germ begins to develop quickly. Otel occurs since the end of April on the end of June, the main weight telitsya in May. Old females normally have two calfs, less often three, at young people — one. The female in thickets and thickets, usually near water gives birth.

Upon termination of rutting of a roe form groups up to 6 — 12 heads, lie in the afternoon, at night move to the winter pastures dated for the least snow areas. Movements in November come to an end. Dumping of horns is observed from November to January. Clear horns of the skin investing them since the end of April on May. With approach of snowfall and frosts of a roe go a little, in a blizzard are defended in thickets. During deep snow keep on open places and vyduva. Since April of a roe wander much. The Telny uterus leaves from herds, males live alone. Keep in thickets, in mountains in the summer, often leave on treeless tops. Young people spend the rutting period separately from mothers in thickets.

In the winter of a roe eat kidneys, escapes and bark of trees and bushes: willows, poplar, aspen, birch, oak, beech, mountain ash, bird cherry, buckthorn. Are fed, besides, with acorns, beech nutlets, a dry grass and leaves which remained on branches. In a beskormitsa dig out a moss, a lichen and a grass from under snow. Willingly eat evergreen bushes, a mistletoe, an ivy. Since spring greedy eat a grass, kidneys and escapes, and also needles and dry leaves. In the summer and in the fall the main forage is made by grassy plants, especially umbrella, and also a wormwood. Willingly eat a clover and potatoes. Often eat green foliage, berries and mushrooms, especially openka and milk mushrooms. Are fed the most part of days, in the fall and in the spring in the winter — in the morning and in the evening. Depending on character of snow cover and all migrations and fluctuations of number are generally connected with change of the fodder mode. In some years there are mass distant otkochevka of roes when in a certain direction many hundreds of animals move.

From sense organs at a roe the hearing and sense of smell are well developed; sight is weaker, than at all other deer.

Enemies of a roe is the majority large and the average size of predators. The main enemy — a wolf, especially during deep snow, the fox and large cats follow further. Young people perish from all predators up to birds of prey. Huge harm is done by ticks and gadflies, skin and nasal, and also mosquitoes and midges. From diseases the roe is affected by anthrax, plague, a diarrhea, etc.