Beaver
The beaver is among the largest rodents: body length without tail reaches 70 — 100 cm, the weight of 11 — 30 kg. In a shape of a body it resembles a huge water rat. The head is a little flattened from above. Eyes are small, with a vertical pupil. Auricles are small, hardly outstanding of wool. A neck short and thick, not forming noticeable interception between the head and a trunk. Forward extremities are shorter and weaker than back; a forepaw with five fingers which bases are connected by a rudimentary swimming membrane. Back extremities larger, also with five fingers connected to claws by a wide leathery swimming membrane. The claw of the second finger of back extremities is split on two parts — the top and lower, and both halves are mobile and can densely develop. To Povidimy, the beaver uses this claw at comb-out of parasites and at greasing of hair fat release of anal glands. The tail of a beaver flat, has the form of the ovate-rounded-off shovel, length reaches it 25 cm, and the greatest width — 15 cm; throughout the hair is almost deprived and covered with large horn guards between which separate short hairs grow here and there. 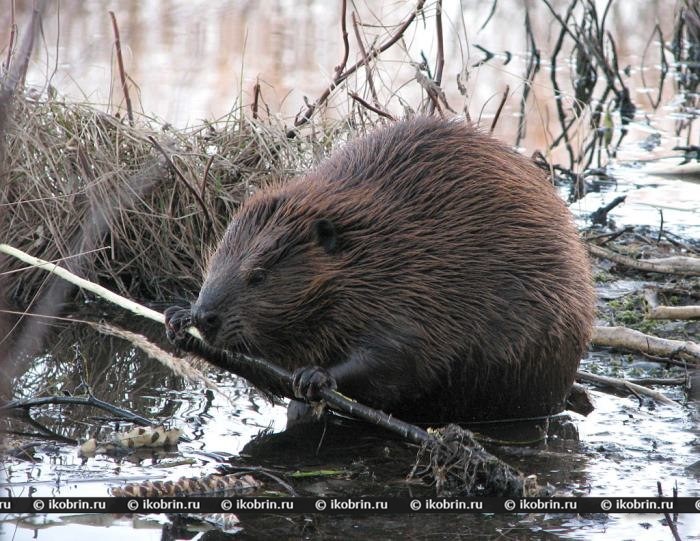 Indumentum of a beaver consists of two main groups of hair: 1) long and rough ostevy and 2) thin, dense and silky, forming an underfur, impenetrable for water. Coloring of hair of beaver fluctuates from light brown till dark-chestnut or almost black color. The lower side of a body is painted is lighter than top. Occasionally various evasion of coloring, in particular albinos meet. The molt once in a year, at the end of spring, but proceeds almost till winter.

The former area of a beaver covered the most part of the territory of Europe and Asia; to the North it in places reached border of forest vegetation. In Europe the beaver was absent probably only in the few places, for example in Ireland, the southern Italy and Greece. In its Asia was not, povidimy, in the northeast of the continent, to the East from the right inflows of Lena, and also to the South from Cupid, on extensive spaces of the deserts of Asia, in Japan, China, Indochina. However in the southwest the beaver reached probably northern Arabia and even Egypt. Distribution of a beaver in North America where he lived almost on all space of the continent was so extensive.

Owing to destruction of beavers for an appreciable length of time, these animals by the beginning of the XX century remained small separate colonies, in particular in Western Europe: on the lower Rhone (France), on Elba (Germany), in the southern Norway and in Poland. In the territory of the USSR the beaver lived in Lithuania, Belarus, in Ukrainian Polesia, across Dnieper near Kremenchuk and in the Smolensk region; on the river of Usmani, etc., in the Voronezh region; on the Konda River and Sosva, in northwest Siberia; at last, the beaver remained in Tuva, on the right inflows of the top Yenisei, and in northern part of Mongolia, on river Urun.

Since 1922 hunting for them was everywhere forbidden. In 1923 in the Voronezh region along the river Usman the hunting wildlife area in 1927 transformed to the Voronezh national park was organized. Two more reserves were at the same time created: Berezinsky and Kondo-Sosvinsky (the founder and the first director — Vasily Vasilyev). Protection of beavers and restoration of their number was their main objective. Since 1927 the first attempts of moving of beavers were begun. From 1927 to 1941 settled 316 beavers in 12 areas of the European part of the USSR and 2 areas of Western Siberia. From 1946 to 1970 were settled 12071 more beavers in 52 areas, edges and the autonomous republics of RSFSR, in 3 BSSR areas, in 8 USSR areas, in Lithuanian, Latvian and the Estonian SSR. As a result of the carried-out actions by the end of the 1960th years the beaver in the USSR occupied the territory almost equal on the area to an area of the 17th century. The increased number of beavers allowed to organize their trade catching again. Now the number of beavers in the territory of Russia reaches 85 — 90 thousand individuals.

Lives mainly in quiet forest small rivers with rather high coast available to digging of holes and covered with wood and shrubby vegetation from soft breeds (an aspen, a poplar, a birch, a willow, etc.) with plentiful herbage that provides beavers with food within round year. Much less often beavers lodge on forest lakes.

On the way of life and especially on construction art the beaver is one of the most remarkable animals. By means of the powerful cutters he not only easily gnaws through branches of trees and bushes, but even brings down the whole trees. Most often beavers dump young trees with thickness of a trunk from 10 to 30 cm, but cases when they gnawed through the enormous trees having in the diameter up to 1 m and even a little more are known. The beaver gnaws round a tree around while the surface of a pogryz does not take a form of the cones turned by tops to each other connected by a crossing point. When this crossing point becomes rather thin, the tree in this place breaks and falls. Having tumbled down a tree, beavers gnaw round its branches, and divide them into parts, and sometimes divide into parts and a trunk if a tree not thick. Beavers eat bark and small branches on the place or transfer to water and alloy to the dwellings where stock food for the winter in the form of the heaps shipped in water.

The main types of constructions of a beaver are holes, hatka, dams and channels. The entrance opening of a hole always settles down under water and has considerable width, to 40 and even 50 cm. At some distance the hole goes under water, further rises with more considerable inclination in thickness of the coast, leaving sometimes from water on distance to 10 — 15 m, but the hole is more often happens shorter. It terminates in the extensive chamber to 1 m in the diameter covered with the split tree pieces picked by twigs and so forth. Often depart from a chamber 1 — 2 more course and more, going again to water or coming in bushes to light.

Hatki settle beavers usually in those places where it is impossible to dig holes, mainly on low marshy coast. Here they are located on a hummock, an island, on a fin and so forth. Outside the hatka has an appearance of a big heap from the brushwood and sticks cemented by dirt from a reservoir bottom; its height to 2,5 m, width in the basis to 12 m; there are no openings seen outside in it. Inside the hatka has an extensive chamber, a bottom' which represents the island surrounded with water consisting of densely stamped sticks and other wood bits and leaves. All entrances and exits of a hatka open only in water and besides at quite considerable depth. Older hatka have on some chambers.

Dams are arranged beavers on small rivers, streams or channels on a current below holes and a hatok, They consist of the thin trunks of trees, sticks and brushwood which are cut off by beavers, with considerable impurity of the turf, water plants, clays and even quite often stones. Above a dam the reservoir, sometimes the extensive sizes is formed. Excess of water filters through a crest of a dam or flows down through the ditch dug by beavers. The dam promotes maintenance of water level in beaver ponds at a certain height and thereof entrances to holes and hatka remain under water all the time. In many settlements beavers suit also the channels serving for movement of animals from holes and a hatok to places of feeding and also for an alloy of construction materials and stocks.

Techka at a beaver begins at the end of winter, before opening of the rivers. Duration of pregnancy is 105 — 107 days. In a dung there are 3 — 5 cubs, and each female has no more than one dung in a year. Cubs are born well developed and covered with dense gentle wool, their weight fluctuates from 380 to 620 g. They develop quickly enough, in a day or two can float and probably at the age of six weeks begin to eat bark in spite of the fact that feeding by milk completely stops only at two-month age. It is definitely when cubs leave a hatka or a hole, but, on supervision not established, cubs remain in a hatka of a female even on reaching annual age. Puberty comes at two-year age.

With approach of fall beavers begin to bring down especially intensively trees and to make their branches in water for the winter. In the winter beavers disappear in holes and hatka and only in rare instances come to light.

As food of a beaver serve leaves and bark of trees and bushes, especially aspens, birches, a poplar and a willow, and also thin escapes and the ends of branches. The beaver eats roots and green parts of water-lilies, reed and other water, coastal and land grassy plants.

On a way of life the beaver is mainly night animal. He perfectly swims and dives, can long remain under water. Often when diving makes a tail on water sharp far audible splash.