Lynx
Quite large cat, dense addition. The body is short, extremities massive and long. Length of a body is 110-130 cm, a tail — about 20 cm, height in shoulders about 60 cm, height of an ear is 7,5 — 8,5 cm, length of a brush is 4 cm; length of a skull is up to 17 cm. The magnificent tanks growing from ears are characteristic. Ears quite wide and long, with brushes of hair on the ends. The tail is shorter than a half of length of a body, as if chopped off on the end. 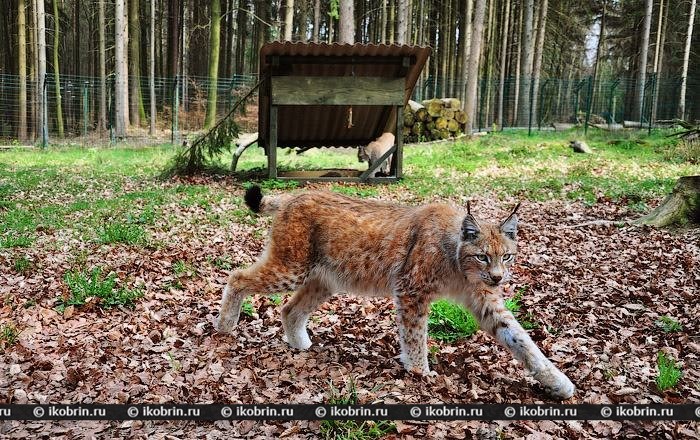 Coloring of fur is very changeable and fluctuates from smoky to reddish. On this background separate short longitudinal dark strips and roundish spots are scattered. A tail — with dark cross rings. Sometimes all this drawing of fur is very poorly expressed.

The lynx is very widely settled in forest and mountain parts of Europe and Asia. In the CIS border of its distribution more or less coincide with limits of growth of big forests though it is not in the Crimea and on Kamchatka. In Central Asia the lynx lives as in mountains of system of Tien Shan, especially in Semirechye, and on Kopet-Dag. Out of the CIS lives in Scandinavia, on the Carpathians and the Pyrenees, in Forward Asia, in China (Tibet and northeast part of the country). The same species of a lynx is found in North America.

Lynx — the typical inhabitant of the dense wood, coniferous in the north, deciduous in the south. Presence of a dense podsed or old windbreak for it is obligatory. In highlands she lodges in wild gorges and in an impassable thicket of bushes. The den often places a lynx among stones and crevices of rocks, in a dense windbreak, or, at last, among roots of old trees.

In the winter in search of food the lynx makes big otkochevka from the region of the permanent residence. On a daily way of life it is mainly night predator, but sometimes she is met also in the afternoon. Techka proceeds from February to April. During this period of a lynx keep in the deafest places and between males often there are cruel fights. Pregnancy lasts about 63 days. The female gives rise 2 — 3, 4 kittens are rare. Young people live with mother to the next period of a techka is not excluded that females copulate in a year.

Lynx — a strong predator, and suffer from her attacks not only small mammals, for example hares for whom she especially often hunts, but also larger as kozul, deer, fallow deer, a musk deer, young boars, beavers and foxes. It pursues a pine-forest game and ruins its nests. Attacks a small livestock seldom. In its food the hare white hare has the greatest value. Depending on changes of its quantity rises and falling of number of a lynx are noticed. Otkochevki lynxes fall on years when hares have a pestilence.

At a lynx the hearing and sight, but sense of smell, as at the majority of cats, weak are perfectly developed. It is very careful and sensitive, skillfully hides. Pursues production a gradual skradyvaniye that then, in several jumps to rush on it. Watches on a track or gets on a tree and rushes on the victim from above. Seldom, time having missed, pursues the production in stealing. The lynx excellently climbs. In usual conditions does not attack the person and does it, being only wounded. The wounds put with teeth, and especially claws of a lynx are very serious. In usual time the lynx is silent. During the marriage period publishes rough and loud purring.

The lynx gives good, strong fur and tasty meat, but is got in a small amount. Eating a game, mainly hares, and sometimes and larger animal, she certainly is harmful to hunting economy. It is got by a wolf trap with teeth, more often self-made samolova, mainly a mouth, and also the gun, the most part with dogs who exhaust a lynx on a tree.