Boar
On appearance it is similar to an ordinary domestic pig who is a descendant of the tamed boar. It is characterized by strong development of forward part of a body in comparison with which the back part much lower and seems weak. The head is big, massive. Canines, especially at males are strongly developed: lower, sharp and trihedral, are directed up; top are stupid and bent sometimes so strongly that their ends are bent up. At females canines are weaker, top are not bent and are not given outside. The sizes of boars in different districts are not identical. The weight of adult animals at different subspecies fluctuates from 48 — 50 to 320 kg. 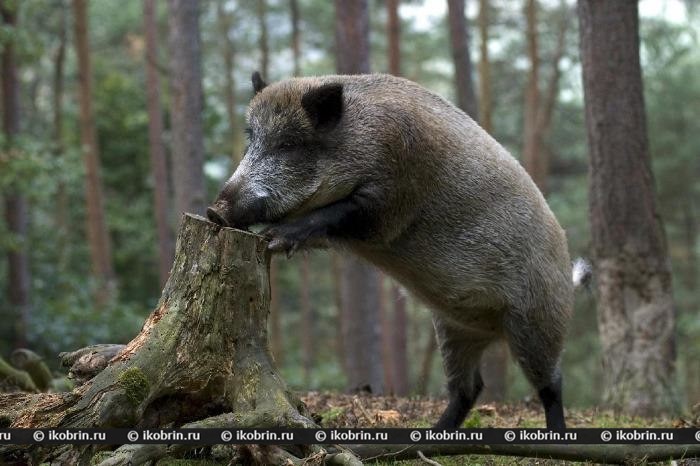 Indumentum is strongly developed. In the winter it consists of the long, split on the end bristles which form on a back a mane, and a dense underfur. Coloring of bristles dark-brown with the light ends, grayish, sometimes almost white. Dense underfur of chestnut-brown color. The general coloring varies as in connection with geographical distribution, and individually. Dark-brown or dark brown coloring, with more darkly painted legs, sometimes absolutely black is most characteristic of boars. When lengthening of the light-painted ends of bristles the boar gets lighter coloring. Summer indumentum consists of rare short bristles, the underfur drops out. Coloring in the summer brownish-gray, sometimes ash-gray. Coloring of pigs is very peculiar and consists of the alternating dark-brown and light longitudinal strips.

Time of a molt depends on climatic conditions. It begins in April or May; in half of June wool drops out completely, since the end of June the bristle, and in August — and an underfur begins to grow. Winter indumentum finishes the development in November — December.

On the traces of a boar reaching in length of 9 — 10 cm and more imprint, except main, and lateral hooves which are put low. The trace of an old boar is wider, is less pointed in front, than at young people. Their lezhka and vzryty them in search of food the earth can be a sign of presence of boars. In cold weather boars do themselves a laying of leaves, branches and a grass.

Earlier the boar inhabited the most part of Europe. Now it remained only in certain districts and in hunting farms. Within the CIS distinguish four subspecies.

The European-Caucasian boar, lives in the European part of the CIS and in Transcaucasia. The sizes are large: adults weigh on average from 100 — 160 to 240 — 260 kg. Coloring is dark, black and brownish, sometimes with a grayish and olive shade.

The Central Asian boar is found in Central Asia and Kazakhstan. Differs in the light coloring varying from sulfur light-brown to straw-colored. The sizes are various.

The Mongolian boar, is widespread in Transbaikalia. The smallest of our boars; weight of adult 55 — 90 kg. Differs in some features of a structure of a skull.

The Far East boar, inhabits Priamurye and basin of the Ussuri River. On a structure of a skull it is close to Mongolian, but differs the sizes markedly. The weight of large males reaches 300 — 320 kg. The largest of boars.

Sometimes meets on open places, but prefers plavn, kamyshevy thickets in valleys of the rivers, the dense mixed woods especially rich with a bush. In the Caucasus lives in almost impassable woods overgrown keep - a tree and intertwined pavoy, a prickly liana, and also in woody damp gorges. In summertime meets quite highly in mountains where rises up to the height of 2000 — 2500 m. Avoids stony taluses, rocky sites. Often keeps near human housing where finds a plentiful forage.

Techka at boars happens in November and December. In certain cases young people copulate at the beginning of January. Between males at the same time there are bloody fights. Adult males drive away from pigs of both younger and weaker males, and the pigs going before with mother. The copulating males eat nothing and strongly get thin. After a techka males, as a rule, lead a single life. Young people join again mother with whom go until a farrow. Pregnancy continues about four months. In the second half of March and in April pigs, usually 5 — 7, in certain cases to 10 are born. During a farrow the den with a thick laying, usually in a dense thicket is arranged. In the first days pigs do not depart from mother, but soon enough begin to make considerable transitions. Often several females with pigs form one herd which also the subpigs who are driven away during a farrow join. As an exception in herd there are also adult males. At the end of summer pigs quite often weigh more than 15 kg. For the first time boars copulate on the third year of life.

Movements of a boar are connected with seasonal changes of living conditions. So, boars in summertime are widespread in mountain parts of the Caucasus quite evenly to a strip of the Alpine meadows. By the end of summer they go down below, in the zone rich with acorns, nuts, pears. By the time of maturing of bread in a large number appear near human housing. In the winter, the it surovy and mnogosnezhny, the boars go down below, but in case of thaw quite often again rise to higher places. In snow winters boars move on the southern slopes where the snow cover is weaker.

Being an omnivore, the boar nevertheless generally consumes easier got vegetable food which character changes on seasons. In the winter and in the spring he searches for the acorns and nuts which remained since fall, digs out tubers, roots and bulbs, passes to berries in the summer. The end of summer and an early autumn are most plentiful sterns which besides are very different, and the boar becomes legible concerning food, eating only the best, mature fruits. In the fall acorns and nuts are showered. Absorbing these fruits rich with oils and carbohydrates, boars quickly grow fat. Conditions of food of a boar in severe snow winters are heaviest.

From cultural plants boars prefer corn. Besides, wheat, barley, potatoes, and especially a buckwheat and millet are exposed to their attacks. It is much more, than from the eating, crops suffer from trampling. Sometimes in one night big acreage are destroyed.

Along with the main, vegetable food boars use also animal. In search of larvae of insects and worms they rummage on coast of the rivers and streams. Small rodents also often fall prey of a boar. In fishing areas on the Dagestan coast and in the delta of Volga the boar eats the fish cast ashore or remained on the place of fishing.

The boar on the way of life can be considered as a night animal: in the afternoon he sleeps, and comes for greasing at night. In the afternoon the boar disappears in difficult available places: on stronger sites among fenny more smoothly, in thickets of bushes, especially prickly as blackberry, hold - a tree. In the winter in mountains boars leave sometimes on more open places where snow is blown off by wind, or in the woods where it lies less thick layer. Soon after a sunset the boar leaves to be fed near human dwellings and on fields. From feeding comes back to spending the night after dawn. Daily transitions are very big, and in such cases boars often are late. Therefore they can be met coming back to day thighs of hours at 9 — 10 in the morning.

Out of external feelings the hearing and sense of smell are perfectly developed. Sight is weaker therefore incidentally the boar can approach not movably standing person of a step on 3 — 4. A boar voice when it is quiet, for example on greasing — all the known grunting indistinguishable from grunting of a domestic pig. The scared and wounded pigs and pigs loudly squeal, but adult males never squeal. The sounds made during protection or fight represent loud puffing; in rage boars loudly, hoarsely roar. The same roar is published by males at fights during rutting.

The movements of a boar are very fast. He only seems heavy, slow, but runs very quickly, being easily torn through thickets of prickly bushes though usually uses the constant trodden footpaths. Upon transitions easily crosses the rivers, and copes with quite rapid current.

As characteristic feature of habits of a boar serves bathing. He bathes daily, even in frosts. For bathing uses the hollows filled with water and holes, pools or sites, free from vegetation, in kamyshevy thickets. In general he prefers dirty, clay reservoirs; in clear water, in the river bathes seldom. Water is so necessary for a boar that in search of it he does transitions not smaller, than in search of food.

Usually the boar is very careful and at appearance of the person leaves, but wounded or enraged by prosecution often leaves any care and rushes on hunters. The huge force, speed of movements and such powerful weapon as canines, do a boar to one of the most dangerous opponents. Dogs often perish during kabany hunting; cases and wounds of hunters, sometimes very heavy are frequent. Females are less dangerous, but at pigs and they become terrible.

In places where domestic pigs vypasatsya in the wood, cases of their crossing with boars are very frequent. The posterity from such crossings is quite viable and prolific.

Adult boars of enemies have some. From animals the greatest danger to them is constituted by a tiger and a leopard who cope also with old males. Wolves venture to attack a boar, having only gathered pack.

For pigs when they beat off adults, can be dangerous and more small predators as a jackal, a cat, a lynx, but on wandering in herd these predators seldom dare to attack. Among boars cases of the general diseases which are strongly reducing a livestock are frequent. Diseases of a foot-and-mouth disease and other diseases are noted. Many boars perish from exhaustion in multisnow winters. In the delta of Volga they suffer from flooding more smoothly at big winter setups of water during storm.