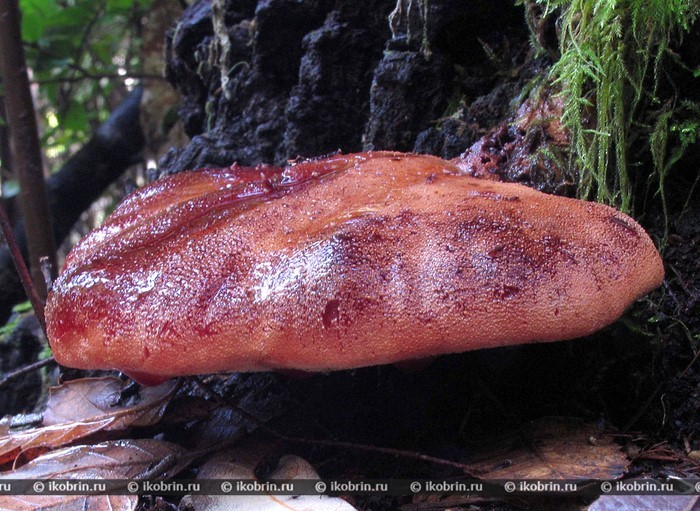 International importance:
In the Red List of Belarus it is included for the first time. It is protected in Poland.

Description:
Fruit bodies one-year, sedentary or with a short lateral leg, zhelvakoobrazny, yazykovidny, laptchatoobrazny, sometimes almost roundish, convex from above, with a diameter of 10 cm, 2-6 cm thick, in a fresh state fleshy, juicy, subsequently with age become dense, coarse-fibered, when drying firm, decreasing in sizes. Hats single or growing together on 2. A hat surface radial and striped, with nipples, orange-red, blood-red, in old age purple-brown. The edge dulled. Fabric thick, fleshy, at young mushrooms is impregnated with reddish juice. Taste is sourish. The gimenofor surface in the beginning white, becomes dim brown later. Gifalny system monomitichesky, hyphas with buckles. Basidiums are club-shaped, 4-sporous. Disputes are ovoid, tear-shaped, hyaline, thin-walled, not amyloid, 3,5-5 3-3,5 microns in size. Cystitis is absent, but in the regions of tubules there are thin-walled cylindrical tsistidialny elements up to 60 microns long.

Habitats:
Meets in the deciduous woods. Grows on stubs, trunks of live and dead deciduous trees, mainly an oak and a chestnut.

Biology:
Causes brown decay. Oak wood at early stages of defeat does not reduce the fortress, but at long influence of a mushroom is softened and becomes fragile. Fruit bodies are formed in June - September. Decorative edible fungi.

Number and tendency of its change:
Number is small everywhere. The number of locations is reduced, in some of them the mushroom disappeared. Single copies meet.

Major factors of threat:
Collecting fruit bodies and violation of conditions of growth by adverse anthropogenous factors (all views of cabins of the wood, economic transformation of lands).

Protection measures:
It is protected in National park "Bialowieza Forest". Periodic control of a condition of the known populations, search new, explanatory work among the population, a ban of collecting fruit bodies, the prevention of anthropogenous influences in places of growth of a look are necessary.