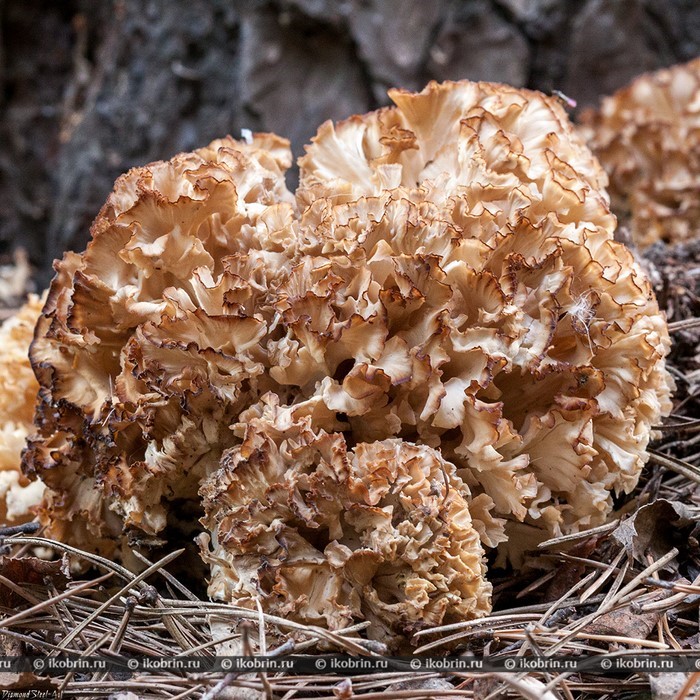 International importance:
It is included in the 2nd edition of the Red List of Belarus (1993) and the Red List USSR (1984). It is protected in Lithuania, Latvia, the Russian Federation, Ukraine and Poland.

Description:
Fruit body repeatedly korallovidno branched, almost spherical or elliptic, in the diameter up to 10-35 (50) cm, sometimes weighing up to 6 kg, fleshy, fragile, from whitish till okhryany and dark yellow color, on a short shapeless leg. Branches are flat, thin, lopastevidny, as a rule, with wavy, slightly gear edges. Hyphas with buckles and without them, svetoprelomlyayushchy. Basidiums are narrow and club-shaped, 30–48´ 5,5–7 microns. Disputes elliptic or semechkovidny, 4–6 ´2,5–4,5 microns, with a distinct cover and the contents refracting light, are frequent with a large drop of oil.

Habitats:
Meets in the pine woods. It is in some cases capable to occupy much anthropogenically transformed communities, judging by a find in park of Chelyuskins in Minsk. Grows and forms fruit bodies at the basis of trunks or fresh stubs and on pine roots. The parasite, according to other data, a weak parasite or saprotrof, causes yellow-brown or brown cubic decay of komlevy part of a trunk and roots.

Number and tendency of its change:
Meets in the form of single copies. Gives in to cultivation in vitro, gives moderate biomass in the shipped culture, however in the republic in collections of cultures it is not supported.

Major factors of threat:
Small number of populations, collecting by the population as good edible fungi.

Protection measures:
"Bialowieza Forest" and "Narochansky" is protected as a part of natural complexes of the Berezinsky biospheric reserve, national parks. Identification of new locations, audit of the known populations, the organization of wildlife areas of local value, explanatory work among the population, a ban of collecting fruit bodies is necessary.