It is created in December, 1997 in Kobrin district. It is located to the north of the lake Lyuban and to the west of the dam delineating reclaimed the earth of state farm "Dneprobugsky". The main land user - Divinskoye a forest area of Kobrin forestry; the area is about 3,0 thousand hectares. 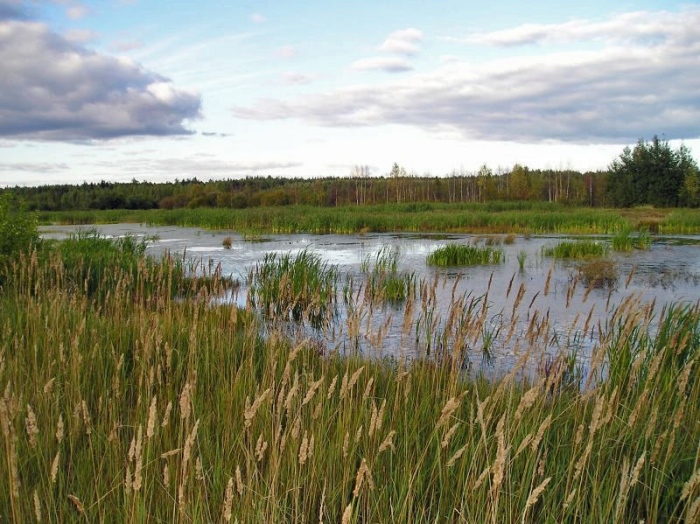 The wildlife area is created for the purpose of preservation of one of the most representative fragments of the Dnieper and Bugsky marsh and carbonate and saline (MCS) landscape and meliorative complex within which in forest island communities the largest of known in Belarus and beyond its limits of a tsenopopulyation of the most rare orchid - a lady's slipper of the present are revealed (yellow).

The territory of the wildlife area is in a zone of unloading of the ground pressure head waters enriched with a calcium hydrocarbonate in almost drainless flat decrease. The modern relief is presented by the vzbugreniye which are chaotically located on almost straight zatorfovanny lowland with hydrogene accumulation of meadow marl.

According to geobotanical division into districts the territory belongs to the Bugsko-Pripyatsky district of the Bugsko-Polessky geobotanical district of a subband of the broad-leaved and pine woods. About 85% of the district are made by the lesopokryty area. The physiognomical shape of forest vegetation consists of a pushistoberyozovy melkolesye with impurity of willows ashy and rozmarinolistny on zatorfovanny lowlands among which carbonate zalesyonny vzbugreniye with forest stands as a part of which broad-leaved breeds are distinguished are located: oak, ash-tree, maple, hornbeam, linden. Open sites grassy reed sedge gipnovykh, reed and sedge and sedge bogs which also gradually grow with a birch fluffy are quite seldom noted.

The birch woods on peat and marsh soils arose in connection with the termination of mowing during war and during the post-war period more than 50 years ago. After carrying out drying melioration on the lands adjacent to eastern frontiers of a site, process of overgrowing of bogs a birch melkolesye considerably accelerated.

In BKS-complexes the alder woods usually do not meet (because of high value rn stagnant hard ground waters). However along the Cossack and Divinsky channels draining the southern part of the wildlife area plantings of an alder black were fragmentary created.

The greatest scientific interest among floristic sights of the wildlife area is of orkhidny and, first of all, a lady's slipper. In the Red List of RB it is referred to the 1st category: preservation of a look is impossible without acceptance of special measures. Places of growth of a lady's slipper in the wildlife area "Divin - the Great wood" are revealed on island carbonate vzbugreniye and dated, as a rule, for oak groves snytevy, is more rare - to oak groves krapivny.

Oak groves snytevy are formed on rich cespitose and gley soils. In forest stands except an oak chereshchaty the ash-tree, a maple acutifoliate are presented, the birch warty is more rare - fluffy, an aspen, occasionally - a linden and birch barks. The Podlesochny tier is well developed and presented svidiny, a filbert, an euonymus European and warty, by a buckthorn. In a ground cover except a goutweed ordinary, being the main indicator in this type of the wood, zelenchuk yellow, a nettle dvudomny, a zhivuchka creeping, a budra ivylike, the drop cap, a lily of the valley May, a rank forest, a yasmennik odorous, a medunitsa not clear, the pro-forester long-term, Veronika dubravny, a serpukha not prickly, the perlovnik hanging, stone bramble, a kochedyzhnik female, a buckler fern man's everywhere meet. At relative specific abundance the live ground cover is, as a rule, rarefied.

The lady's slipper in oak groves snytevy meets both small groups till 15-25 of individuals, and considerable congestions. Greatest on the number of a tsenopopulyation are noted in the natural boundary the Storm (more than 200 copies), in quarter. And - vydela 13, 14 (respectively, 150 and 145 copies), Ur. Hmelitets (about 1,5 thousand), Ur. Islands Lipki (160 copies). Characteristics of a tsenopopulyation of a lady's slipper in oak groves snytevy are: rather low quantity of the blossoming individuals (20-35% of number of considered), average height of plants of 18-23 cm, average quantity of leaves 3,5-3,9. Viability of all tsenopopulyation normal.

Oak groves krapivny are noted on very rich cespitose and carbonate soils. In the distribution are drawn towards the sites adjoining to Cossack Trostyanitsky and partly to Divinsky to channels. They, apparently, strengthened the pro-accuracy of the ground waters enriched with calcium as was the major ecological factor of formation of this type of the wood. A forest stand of the first tier difficult - it a birch fluffy and an ash-tree (big impurity), a hornbeam, an alder black, the maple, a linden make an oak chereshchaty. In an underbrush the filbert and a svidina are very characteristic, meet an euonymus warty, a mountain ash less often. A live ground cover a nettle dvudomny, the goutweed, a bennet form a river, vorony eye, a kupen medicinal, chistotet, lady's bedstraws (spring and soft), the spadefoot petiolar, a geranium forest.

The shoe real in oak groves krapivny, as a rule, forms groups, considerable on number, - 100 and more copies. The largest tsenopopulyation are available in quarter 29 (an apportionment 5 - 650, an apportionment of 4 - 420 copies), in northwest part of quarter 35 (120 plants), to Ur. Rossokh and Nettle (140 and 110 individuals). Tsenopopulyation differ in the following signs: quantity of the blossoming plants from 40 to 65%, average height of plants of 23-30 cm, average quantity of leaves 3,9-4,5. The condition of the majority of tsenopopulyation does not cause fears, except for some fragments in northeast part of quarter 29 in places of contact with big fires. The list of other protected species of plants form the following row:

Hiding place ovoid - a rare relic species, category III of the Red List of RB. Groups till 5-10 of individuals, is more rare single copies meets together with a lady's slipper. The greatest number of plants is noted in quarter 8, 11, 29, 35.

Pyltsegolovnik red - the rare look which is quickly reduced in number; category 1 (Red List. In separate years it is shown only by single copies, and in 1997 it was noted very often in quarter 7, 37, 38, Ur. Tovarnukh, Nogovitsa, Rotten Linden, Zverenskiye Vertyi.

Kokushnik long-horned - the rare, found in a small amount and on limited squares look; category III. Single copies are found in birch forests of southwest part of the wildlife area.

Zubyanka tuberiferous - a rare relic species, category III. In a large number it is widespread in quarter 29, 33, 38, Ur. Rossokh. A censer Sarmatian - a rare species which quantity in Belarus is quickly reduced; category P. Sporadic meets in an oak grabovykh the woods only in quarter. And (single copies and groups on 5-7 individuals) and in quarter 9 - single copies. The censer Sarmatian is often dug out by local population for transfer on homestead speed up or is object of collecting as medicinal raw materials.

Kasatik Siberian - a rare species which meets in a small amount; category III. Tsenopopulyation till 30-40 of copies are noted in quarter 8 and 7.

From the plants entered in the List of persons in need in preventive protection are widespread a crested bird hollow, a lyubka two-leaved, a primrose spring, a lily of the valley May. It is disseminated also rare species of grassy plants - voronets eared, dremlik broad-leaved are noted. Herbs grow in insignificant quantity and have no industrial value.

In quarter 11 and 9 the remained massifs of the monoprepotent grabnyak which are very seldom found in the territory of Belarus On the area are revealed prevails grabnyak snytevy, derivative of snytevy oak groves. In the wildlife area 5 animal species included in the Red List of Republic of Belarus are revealed.

Apollo black (mnemozina) - very rare species which number is reduced; in Belarus the only type of a sort. Category III of the Red List. About 20 individuals are found in northeast part of quarter 29. Meets on forest glades and in the activity it is connected with a crested bird hollow on which plants females lay eggs.
Eagle owl - not numerous look, category of 1 Red List. Presence on a site is established on marriage shouts of birds.
Crane gray - a rare species, category of 1 Red List. It is noted in quarter 8. Lebed-shipun - the only nesting type of a sort Swans in the territory of Belarus; category V of the Red List. On a gnezdovya it is noted on Orekhovskoye's reservoir and the lake Lyuban. A stork black - a rare species which number was stabilized in recent years. Gnezdovye it is revealed in quarter 42.

In general, value of the biological wildlife area "Divin - the Great wood" as especially protected natural territory is defined by the following:
1. Creation of the wildlife area is urged to prevent a further partition of once uniform floristic, tsenotichesky and population groups of a biota of the region, their crushing and strengthening of an ostrovization. From this point of view forest fitotsenoza of the wildlife area act as a link in system of the woods of the Brest Polesia.

2. Within the wildlife area places of distribution of the most rare orchid - a lady's slipper of the present are revealed. By quantity of tsenopopulyation (about 50) and considered plants (about 6000) this find have no analogs in the territory of Belarus. Besides, on a site not less than 10 animal species and plants from the protected categories of the Red List of RB are presented.

3. The structure of the wildlife area included considerable part of the peat field "Great Wood" entered in "The scheme of rational use and protection of peat resources..." as object of perspective nature protection fund.

4. In close proximity to the wildlife area the largest reservoirs in the region - the lake Lyuban and Orekhovskoye's reservoir are located that creates necessary prerequisites as for preservation, and restoration in the long term of separate components of a biodiversity of the Brest Polesia.