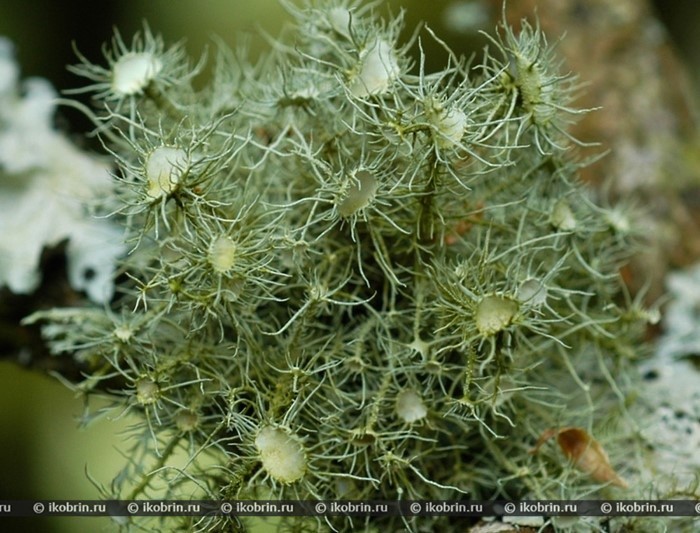 Short morphological characteristic
Sloyevishche of 5-8 (15) cm, the identical length and width, rigid, sticking out, ashy or glaucous, sometimes with far blackened branches, branched out to the basis, with divergentno the dispersing branches. The gomf has short basis, 3-8 mm long, blackened, slightly drawn. Branches 1st about (0,6)1,2–1,5(2,5) mm in the diameter, cylindrical, rigid, simpodialno-, iso-or anizotonicheski-dikho-tomicheski branched, in places of branching with direct bosoms, with the cross unevenly located cracks, on a surface with small warty, quite often blackened nipples. Branches 2nd about (0,5)0,7–1(1,5) mm in the diameter, дихотомическиразветвленные,серовато-зеленоватые,наповерхностисбородавчатыми to korotkotsilindrichesky the nipples towards tops becoming more numerous and large to cylindrical; usually come to an end with apo-tetion, occasionally with the vershinka extended long, gradually utonchayushchimisya. The fibrilla 1-3 mm long which is quite densely located, perpendicularly departing from branches, longer – slightly hanging, simple, occasionally slaborazvetvlenny, smooth, sometimes on a surface with nipples or tuberous. Apotetion 0,3–1,2(2) cm in the diameter, numerous, are usually formed on a top of each branch; ekstsipul one color with tallomy, flat or slabovypukly, smooth, yamchaty to warty. A disk flat or slabovognuty, pale-green or pale pinkish-whitish, covered with a thin whitish raid, smooth or slabomorshchinisty, surrounded with a wreath of fibrilla of various length. The core at action P turns yellow, then gradually there is from orange-yellow to red-orange, from To, C, KC and I (iodine solution in solution of iodide potassium) a core and axial tyazh do not change in coloring; the disk apotetsiyev at action To poorly turns yellow, from With – poorly turns pink, from KS – rozovato reddens, from With – poorly reddens. Contains usninovy, tamnolovy, hypo-tamlonovuyu, skvamatovy, diffraktayevy, burzheanovy, alektorialovy acids.

Features of biology, ecology and fitotsenologiya
Epifitny bushy lichen. Occurs sporadic, small populations among other types usny on trunks and branches deciduous, is more rare than coniferous breeds in the mountain woods (beechen and fir, birch, is more rare than fir) at the height of 1200-1800 m above sea-level. A projective covering – 0,4%.

Number and its tendencies
Number is low. Density of population makes 3 copies on 1 hectare.

The limiting factors
Preparations of types of the sort Usnea as raw materials for pharmaceutical industry, the cabin of the beechen and beechen and fir woods, pollution of the atmosphere.

Protection measures
It was included in the Red List RSFSR (the status 2) [4], RA (the status 2) [5], Krasnodar Krai (category II) [6]. It is protected in KGPBZ. It is necessary to forbid cabins of the beechen and beechen and fir woods in the Apsheron and Mostovsky districts, to regulate recreational loading in the district of river. Small Laba and in surrounding the settlement of Krasnaya Polyana to establish control of a condition of populations of a look in the region.