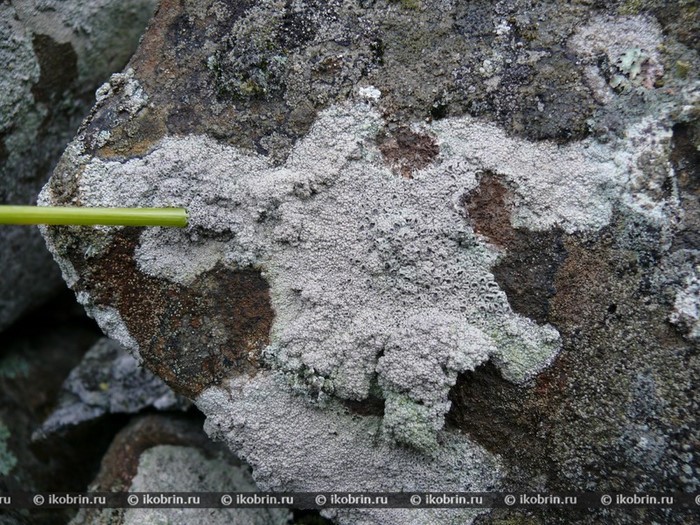 International importance:
It is included in the 2nd edition of the Red List of Belarus (1993). It is protected in Poland and Lithuania.

Description:
Sloyevishche listovaty, is frequent with poorly developed shares, not clearly rozetkovidny, with a diameter of 4-10 cm, almost leathery. Blades 3-6 mm wide, often flat or concave, ascending, on the ends bent down. The top surface of a sloyevishch lead-colored, in the center more dark, with sorediya; lower - from brown till almost black color, on the periphery pale yellowy-brown, brilliant, with the dense black rubbers which are not reaching to the brim blades. Sorali dark gray, brown or olive, golovchaty.

Rasprostraniyeniye:
Europe, Asia, North and South America, Australia, Tasmania and New Zealand. A relic type of suboceanic flora of the tertiary period which main part of an area covers areas with humid continental and oceanic climate. In Belarus quite seldom meets in Vitebsk (Lepelsky and Rossonsky districts), Minsk (Vileysky and Myadelsky districts) and Gomel (Zhitkovichsky, Lelchitsky and Mazyr districts) areas; the majority of the known locations is revealed in the west of Belarus - in Brest (Kamenetsky, Maloritsky, Pruzhansky and Stolinsky districts) and Grodno (Svislochsky district) areas.

Habitats:
Grows on mossy trunks of an alder black, is more rare on other deciduous trees in the boggy old-age chernoolkhovy woods.

Number and tendency of its change:
Meets sporadic separate individuals or, very seldom, small groups. From 25 locations known in the territory of Belarus, 18 it is noted in the territory of National park "Bialowieza Forest". The number of populations low, in a row from them is observed a tendency to reduction. In the republic of an individual of this look usually meet badly developed sloyevishcha, and in normally developed state they remained only in places and reserves, remote for the person.

Protection measures:
"Bialowieza Forest", "Narochansky" and "Pripyat", the Berezinsky biospheric reserve grows in territories of national parks. Periodic control of a condition of the known populations and the organization of purposeful search of new places of growth of a look in similar conditions are necessary. Preservation of the habitats meeting the requirements of a look. For this purpose it is necessary: a ban of any silvicultural activity in places of growth and a ban of drying and meliorative actions near its localities.