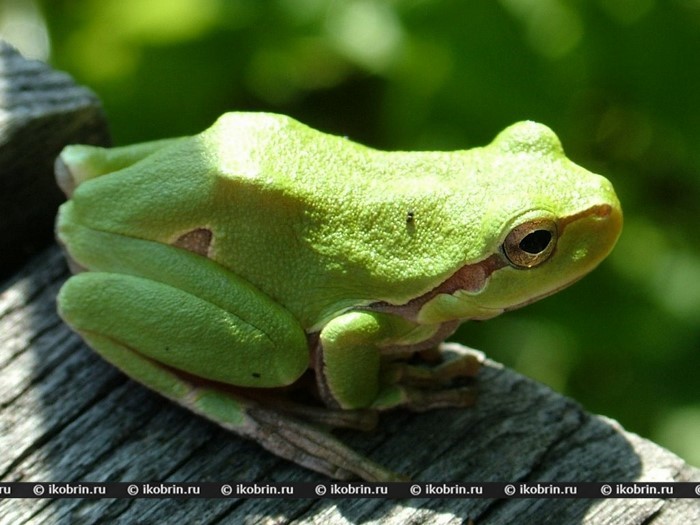 Description of a look: Reaches 45-50 mm. In coloring green and golden colors prevail. From an eye the brown-golden strip distinguishing this look from others reaches for a belly. Stomach of dirty-gray or beige color. Tree frogs can change skin color depending on temperature and humidity. At decrease in temperature and increase of humidity of an amphibian darken (it occurs, as a rule, before wintering).

Disks on finger-tips from the lower party are covered with hillocks of a five-six-sided form which quantity can reach to 13 - 20 thousand on one finger. On a way of action disks remind rubber suckers; their structure is so effective that tree frogs are with little effort capable to sit for hours on absolutely smooth surface (for example, glass). Additional help is given also by a peculiar cellular structure of skin on a throat and a paunch where there are special glands. These glands emit sticky liquid so the tree frog as if sticks to a surface, "embracing" her skin.

Larvae of tree frogs are painted in olive-yellow tone, with metal gloss on a paunch. The tail fin the wide, pointed at the end, back crest begins approximately at the level of eyes. On an upper lip of an oral disk - 2 rows of cloves, on lower - 3.

Habitat: from North Africa to the central regions of Russia. Inhabits Northwest Africa, the Southern and the Central Europe, Forward Asia, Iran. Typical habitats of these Amphibia are the broad-leaved and mixed woods, coast of meliorative canals and river valleys, dumetose and a high grass.

Way of life and food: The diet of drevesnitsa for 96% consists of various forms of invertebrates (at the same time 15 - 20% - flying). Usually tree frogs eat listoyeda, flea beetles, caterpillars, shchelkuna, ants, etc. In house conditions it is the most convenient to feed them with special fodder cockroaches, flies, etc. When catching the tree frog, like frogs, throw out long sticky tongue and capture by it the victim. If production too large tree frogs push it in a mouth by means of forepaws.
The most part of time of the tree frog is spent on trees. Throughout a warm season in the afternoon and especially it is possible to hear the loud voices of tree frogs reminding a duck kryakanye at night. However day of the tree frog is spent not movably, grabbing only the production which is flying by by. These Amphibia in twilight are most active. In the evening they go down from trees in a rosyany grass or in a reservoir for a popolneneniye of reserves of moisture. Then they come back upward, to foliage where begin hunting.

Hibernation: In the North Caucasus the tree frog leaves on wintering at the end of September and in October. It winters in cracks of stone constructions, under leaves and a moss at the bottom of trees, in hollows, holes, under stones and in silt at the bottom of reservoirs. There are tree frogs at the beginning of April in the spring. At first males wake up, and females leave only 6-8 days later.
Reproduction: Tree frogs reach Polovozrelosti on 3-4 year of life. In May pairing and spawning begin. Marriage callosities at tree frogs are developed poorly. Tree frogs can copulate on the land and lay caviar in damp hollows of trees, in bosoms of leaves of terrariumny plants, for the damp earth. The female lays caviar in water, portions, in the form of small spherical lumps. The jellylike cover of caviar can maintain long time dryness of air, becoming covered by a film like "polyethylene".

Fertility of tree frogs is rather small – 500 - 1400 berries which the female postpones in the portions on 4 - 100 pieces in the form of small lumps. In the beginning - about 70%, the second portion makes only 20%, and the last - only 10%. Tree frogs throw caviar usually at night (after 23 hours), one couple copes with it for 1 - 6 hours. Caviar, after fertilization by a male, falls by a dock apron. Light larvae hatch from eggs approximately for the tenth day, length of their 5 mm. In small congestions of water development of eggs is slowed down. After the female laid caviar, tadpoles appear in 8-12 days.

Usually for the fourth day after hatching larvae of the tree frog have short external gills, they do not branch and disappear soon. If caviar is laid directly for the damp earth, then larvae hatch already without external gills or with underdeveloped gills. Approximately for the fiftieth day at normally developing tadpoles hind legs grow. It is easy to distinguish tadpoles of tree frogs on well developed, vesloobrazny, strongly pointed by the end tail which skin border on a back passes up to eyes forward. Eyes at them are strongly shifted on one side. Cases of wintering of larvae of tree frogs are known. 80 - 90 days tadpoles develop and only then pass process a metamorphosis. Having passed process a metamorphosis, young tree frogs at first keep generally on a grass about reservoirs and are very active in the afternoon.

Conditions of keeping: It is necessary to support tree frogs in terrariums of vertical type with abundance of greens. It is the one bottom best to put a drainage layer (for example, small expanded clay), and from above - a moss a sphagnum. It is more rational to plant plants in flower flowerpots which are established at the bottom and are decorated outside by the same moss. With tree frogs numerous representatives arroidny and bromeliyevy are the most suitable for a terrarium; in the latter case it is necessary to avoid copies with leaves on which prickles grow. Optimum temperature of contents is about 22 °C (room).

The tree frog winters at a temperature of 8-10 °C. In April – the beginning of May of tree frogs bring out of wintering. It is wintering animals better not to stack, having replaced it small temperature (12 - 14 °C) and light diapauzy during which animals are not fed.

In the mornings males can sing.