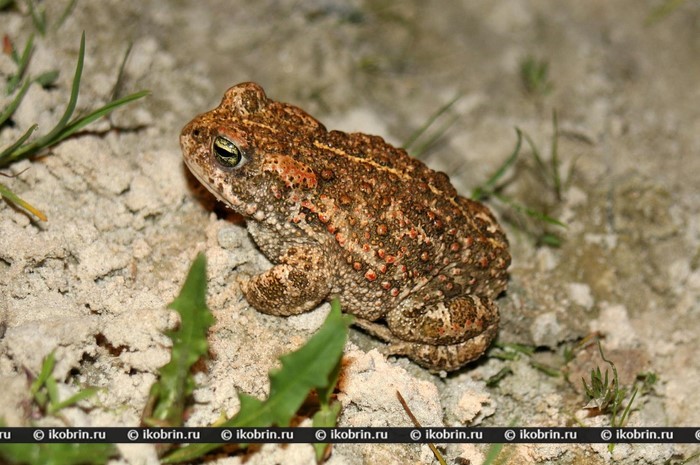 International importance:
The look is included in the Appendix II of the Bern convention, Red Lists of Lithuania, Latvia, Poland, Russia, Ukraine.

Description:
Medium-sized toad. Length of a body of males to 7,1 cm, females to 7,3 cm, weighing 37,5 and 43,5 g respectively. Coloring of a back from light - gray and olive to green-brown with dark stains and small red points. From a muzzle tip to an anus there is a thin, continuous or faltering accurate strip of yellow or pale yellow color. Iris of the eye of eyes golden-green. A belly dirty-white or lurid with spottiness. Sochlenovy hillocks on an internal surface of fingers of back extremities steam rooms, occasionally the 2nd from above one. The top of the 4th finger of a forward leg does not reach the first joint of the 3rd finger. An inner edge of a tarsus with a longitudinal skin fold. Forward extremities are comparable on length with back therefore the main way of movement of a toad - short dashes. Large poisonous glands behind the head (parotitises) - straight lines. Males on 1, 2 and sometimes 3 fingers of forward extremities during the spring period have marriage callosities of black or dark-brown color which during the summer turn pale.

Rasprostraniyeniye:
Inhabits all Western Europe, reaching to yuzh in the north. Sweden and Britain, in the south to sowing. Italy, Austria and Czech Republic. East part of an area passes across the Kaliningrad Region, the countries of Baltic and North zap. To Ukraine. In Belarus takes place vost. look area border on the Deep line - Lepel - Babruysk - Mazyr. Populations in the West and the southwest of Belarus are most numerous. Most vost. the find of a cane toad belongs to Padutov A.E, and according to some unchecked data it can reach 29 °20-vost. longitudes.

Habitats:
Open landscapes near floodplains of the rivers, the reclaimed lands, the farmland, the meadows, sandy dunes overgrown with the pine woods near various reservoirs - lakes, meliorative channels or ponds. Prefers to lodge on easy sandy or sandy soils. Often habitats settle down not far from settlements of the person.

Biology:
Breeds since posledyony decade of April - the 1st decade of May until the end of May. Vocalization and in later terms is sometimes noted. Migrations to reservoirs are noted at 10 °C in the spring, and the minimum temperature threshold of vokalizatsionny activity of 12 °C, at warming up of water to 13-14 °C begin to sing actively. Spawning reservoirs of a cane toad superficial, poorly overgrown, landlocked or slaboprotoyochny. As a rule, it is meliorative channels, sandpits, temporary reservoirs on fields and on spring floods of the rivers, superficial fire reservoirs with flat coast. The number of caviar in layings fluctuates from 2800 to 4100. Fingerlings leave reservoirs in June-July. Eats mainly bugs (38,9%), including weevils, ground beetles, ladybugs, listoyeda, mertvoyeda, dipterous (27,7%), Hymenoptera (29,1%), spiders (1,3%), butterflies and their caterpillars (1,3%) and some other invertebrates. Independently digs holes in easy soils where takes cover throughout the activity period regularly changing the shelter place. On wintering leaves in September, disappearing in various land shelters or burying to the soil.

Number and tendency of its change:
Look, being close vost. borders of the distribution, it is subject to considerable fluctuations of number. In the 1980th and to the middle of the 1990th in a large number it was noted near the Vileysky reservoir, in Bialowieza Forest. In general number has the general tendency to noticeable decrease. Density of a cane toad as much as possible reaches values of 25-200 copies/hectare, however usually it is extremely low (0,02-3,3 copies/hectare).

Major factors of threat:
Strengthening of the anthropogenous influence expressed in noticeable transformation of habitats, overgrowing or disappearance of reservoirs of reproduction and habitats. In places with a low number a negative role is played by a predatoriness factor.

Protection measures:
Owing to a priurochennost to an anthropogenous landscape as the most significant measures of protection it is necessary to consider restriction of separate types of economic activity in close proximity to look habitats (agricultural development of adjacent territories, restriction of a pasture, drying melioration, use of pits of various type for dumps of household garbage and waste). Positively cleaning of the growing reservoirs, construction of new ponds and reservoirs influences increase in number. As an important measure it is necessary to consider promotion of preservation of Amphibia.