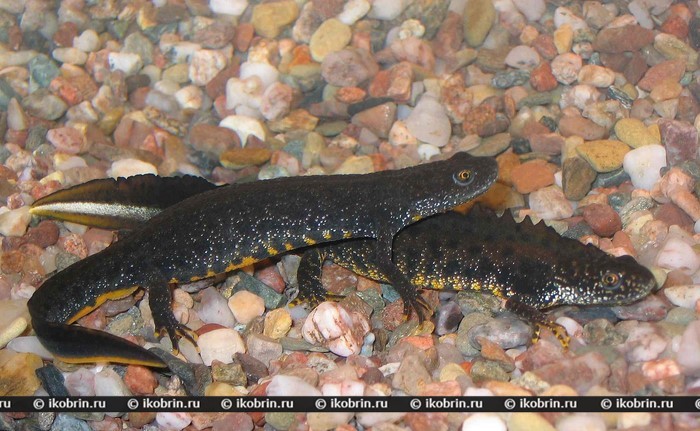 International importance:
It is included in the MSOP Red list (LR/nt, ver. 2.3, 1994), Red Lists of Latvia and Lithuania.

Description:
Large triton. Length of a body doyosyotigat 97 mm, tail length - 65 mm. The largest izvestyony weight - 14,3 g. Skin has a coarse-grained structure. The general coloring of the top side of a body black or black-brown with the black, not clearly appearing spots. A belly orange or orange-yellow with black spots. A throat black along edge of a jaw and orange-yellow in the basis. On each side trunks and on a throat are available numerous, small, white points. Males on each side and on the middle of a tail have a wide pale blue or nacreous strip which begins a little behind the tail basis the indistinct line and comes to an end bright, with contrast border, on a tip. Eyes are golden-orange, a pupil black. Finger-tips orange or yellow. Polovozrely males during the marriage period, and also during continuous life in water, on a back have the jagged crest which begins on the head between an eye and comes to an end at the level of a belt of back extremities. The crest of a tail has no jags. Females have no crest on a back, and the bluish strip on each side of a tail is hardly noticeable or is absent. Sometimes along the middle of a back there is a narrow yellowish or reddish line. Larvae have very long fingers. The tail smoothly passes into a thin long thread on the end.

Rasprostraniyeniye:
The edge triton inhabits all Europe (except most having sat down. and yuzh. areas) and part of Asia (to the West of Western Siberia). It is widespread in forest and forest-steppe zones, on the plains located at sea level. In mountains meets only in the Carpathians (to 1450 m above sea level). The isolated, "ostrovyony" parts of an area where separate populations live are known. In the territory of Belarus it is widespread everywhere, but extremely mosaically.

Habitats:
The edge triton meets in the broad-leaved, small-leaved and mixed woods located near various reservoirs. Out of the woods occupies open and zakustarenny meadows, inundated sites of the rivers and lakes, various bogs. A penetration condition on the urbanized territories is existence enough deep (usually not less than 0,5 m), not cultivated and nezayogryaznenny reservoirs with slowly current or still water.

Biology:
The marriage period and otkladka of caviar usually occur from April to May. The male carries out specific marriage dances, characteristic of many species of tritons. Greenish-white berries are postponed by a female on one or portions on 2-3 pieces. The embryonal development lasts 13-18 days, larval - about 90. Metamorphoses usually at the end of August - September (the preservation case for a larva of external gills within 1,5 years is known). The Polovozrelost comes for the 3rd year of life. In bondage there live 25-27 years. Winters on riding bogs, in heaps of large gravel and vegetable rags on railway embankments, in cellars of houses, in deep cracks of the soil. Can make distant migrations on winterings - to 1 km. Larvae eat small Crustacea, mollusks, larvae of insects. Adult animals on the land consume earthworms, slugs, insects. In water food of adult tritons is similar to food of larvae. For an edge triton the cannibalism and food for vertebrate animals - for example, larvae of tailless amphibians, larvae and adult individuals of an ordinary triton is known. Natural enemies not really is a number of species of Amphibia, reptiles and birds much.

Number and tendency of its change:
In general it is considered not threatened look, but it is very rare everywhere. Population density of 1,4-5,6 pieces/hectare. For the 25-year period of supervision reduction of number of cases of finds and a total disappearance of a view from the extensive territories adjacent to large settlements Minsk), and the areas which are actively visited by people is noted. Possibly, it is tended to reduction of number of this look in all territory of Belarus.

Major factors of threat:
Pollution, drainage and destruction of reservoirs, deforestation, introduction of fishes in reservoirs, an urbanization of territories, increase in a network of roads, direct destruction by people, for example, catching for contents in terrariums. Negatively the number of an edge triton is influenced by the digging activity of a boar, especially in the broad-leaved woods.

Protection measures:
Special measures of protection it is not applied now. Necessary measures for preservation and prevention of disappearance of an edge triton are: work on identification of steady local groups of an edge triton and establishment in such territories of zones of the security mode providing, in particular, restriction of agricultural and silvicultural activity, protection and preservation of inundated reservoirs, and also a ban of trade in tritons.