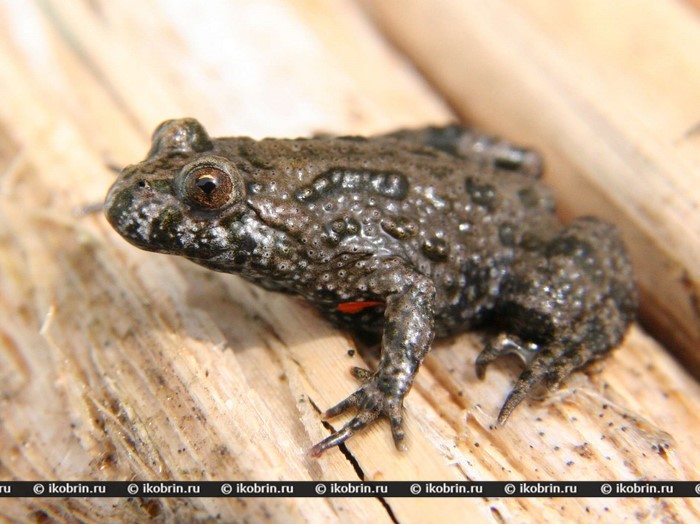 In fauna of Belarus one of the smallest amphibians (length 4-4,5, occasionally to 6 cm). The back is light gray, brownish with dark stains, a belly bright orange or red with bluish-black spots. A skin with numerous warts which allocate a caustic secret. Ends of fingers from above black. On length of a female there are more males, and on weight are equal to them. In marriage time males have black callosities on the first and second fingers of a forward extremity and on internal part of a forearm. Skin glands of a zherlyanka allocate a poisonous secret — frinolitsin.

At danger accepts the warning pose – turns over on a back and it is curved, "showing" bright spots on a belly. Characteristic of a zherlyanka krasnobryukhy sounds – "the godfather … the godfather … the godfather …" or "unk … unk … unk …". Puberty on the 3rd year of life. An exit from wintering in different places occurs in the second half of March — at the end of April. 15-20 days later after an exit from wintering at a zherlyanok there comes the reproduction period. Reproduction in the 1st half of April – May at the water temperature of 14-16 degrees. Spawning all summer. The female lays off until 300 berries a la carte 20-80 pieces. Each berry is pasted separately on water plants.

Larval period about 90 days. Tadpoles hatch in 4-10 days and have length of 3,5-5 mm. They differ in a wide tail fin and are capable to move of rather long distances. On wintering since September – October. Winters on the land in holes of rodents, holes, cellars. Duration of hibernation is about 150 days.

In Belarus meets across all territory, a thicket in the southern and western areas. Lives in small reservoirs with an oozy bottom and dense vegetation which well get warm the sun and are covered with a duckweed, in bogs, ditches, staritsa. Far does not depart from reservoirs. During the spring and summer season of a zherlyanka can make movements from one reservoir to another on distance to 700 m. For spawning choose a reservoir with constant water level. Movement speed a zherlyanok on average 33 m a day. Are active at water temperature from 10 to 30 °s.aktivn in the afternoon and in the evening. It is fed with water invertebrates: larvae of flies, spiders, mollusks, bugs and so forth.