Raspberry ordinary – a bush of family of Rozotsvetnye (Rosaceae Juss.) . The long-term root system representing a rhizome with numerous roots and the krone created by biannual and one-year escapes is characteristic of raspberry ordinary. Roots expand in the parties on distance to 3 m and soils on 40-50 cm get deep into. At raspberry unlike many berry bushes life expectancy of elevated escape makes 2 years. Escapes of the first year slaboshipovaty, green, 1,5-3,0 m long. For the second year of life escapes become brown, stiffen. Leaves are oval, petiolar, difficult, consisting of 3-7 ovoid leaflets, on a stalk are located ocheredno. The sheet plate from above dark green, and from the lower party whitish, is covered with small hairs. In bosoms of leaves the mixed kidneys are formed. For the second year lateral branches with clustery inflorescences of the white self-pollinated oboyepoly flowers about 1 cm in the diameter are formed of them. The period of blossoming falls on June-July and 20-25 days last. On the expanded receptacle the fruit – a combined stone fruit (multistone fruit) trimmed of yellow, red or black color is formed. The fruit can weigh from 3 g to 6 g. The harvest is formed mainly in a middle part of escape. The plant reaches optimum productivity for 2-3 year after landing. 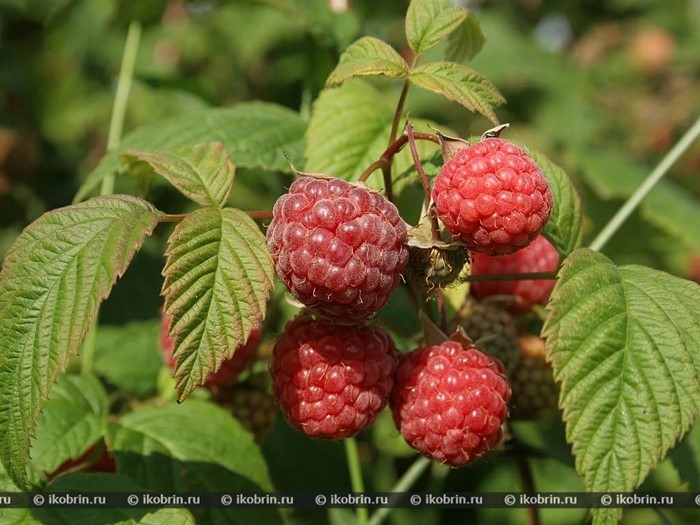 Growth area in the territory of the CIS. Raspberry ordinary is known in culture from 3rd century BC. In the Middle Ages the plant began to be cultivated in Europe, and since the 12th century in Russia when it was landed together with cultural plants in the estate of boyars situated near Moscow Romanov. The majority of grades comes from two types: Raspberries of ordinary (Rubus idaeus) and Raspberry black (R. occidentalis L.). In Russia the area and the Volga region is cultivated in the Urals, in Siberia, Central, and the main areas are in Western Siberia.

Cultivation. Raspberry ordinary badly transfers a drought and excess of moisture, is photophilous, imposes moderate requirements to heat. For growth and development temperatures within 18-25 °C are optimum. The vegetation period necessary for ripening of escapes makes 130-150 days. Plants are capable to maintain negative temperature of-40-45 °C under snow cover. Places great demands on fertility of soils. Well you grow on gentle slopes with well trained, not heavy, but moisture capacious soils with neutral or subacidic reaction and the sufficient maintenance of elements of mineral food and a humus. At excess nitric food winter hardiness of plants can decrease. The culture is extremely plastic and can easily adapt to various climatic conditions.

Preparation. Collect fruits in the summer in a maturing phase in dry weather, after dew. Put in a firm container layers, dividing them branches or leaves.

Security actions. Raspberry actively breeds rhizomes, and also fruits stone fruit. The plant plentifully fructifies in 3-4 years. When collecting raw materials it is not necessary to tread and break a bush, especially one-year escapes. Expediently actively to enter a plant into culture, including in nature. The fresh-gathered raw materials are looked through, separating mechanical impurity and the damaged fruits.

Drying. At good ventilation and temperature of 60-80 °C. The raw materials are displayed a layer of 1-3 cm and often mixed. Dried fruits to the touch elastic. Exit of dry raw materials of 18-20%

External signs. According to the reference document fruits in the form of difficult 30-60 accrete stone fruit, a rounded cone-shaped form, about 1 cm in the diameter. Color outside grayish-pink (gray and brown and crimson). The pulp is pink, stones dark yellow. The smell is pleasant, characteristic. Taste is sourish and sweet. Reduce quality of raw materials impurity of the fruits which stuck together in lumps, other parts of raspberry and foreign plants, and also mineral impurity, a mold, decayed, an izmelchennost. Authenticity of raw materials is confirmed by characteristic morphological features.

Storage. In the dry place, it is better on drafts, preserving against wreckers, rykhlo having packed into bags. An expiration date till 2 years.

Pharmacological properties. Fruits of raspberry possess sudorific property. Thanks to availability of weak organic acids fruits promote shift rn in the alkaline party, to removal from an organism of salts of uric acid, stimulate a mocheotdeleniye, improve digestion. The salicylic acid which is contained in fruits renders antiseptic, febrifugal, sudorific and anti-inflammatory action. Now raspberry leaves are actively studied, their styptic property is established. Extract from leaves of raspberry has gormonopodobny effect on experimental animals.