Ghost of the Prince mountain

In transfer "War of the worlds. Godforsaken places" the channel of Ren-TV, aired on August 21, 2012, among others the plot about the Prince mountain which is in Kobrin district of the Brest region between the villages of Lyakhchitsa and Novoselka was shown. The legend reflected from generation to generations about the princess Olga which accepted death here from hands of enemies and whose remains still are based in this earth is connected with this mountain at locals long since. Interest in a plot was caused by a mention that its ghost still disturbs live, and the last even establish peculiar charms in the form of effigies from women's clothing to protect themselves from neupokoyenny soul. If the folklore legend was known of the princess, generally thanks to efforts of the native of the village of Lyakhchitsa Yury Borisyuk, then about a ghost we happened to hear for the first time. And "Ufoky" could not but pay attention to this history here, knowing from own experience as similar programs on abnormal subject by the mentioned Russian TV channel are created. On April 28, 2013 prospecting departure to the place of group of two people (Victor Gayduchik, Yury Sakharuta) took place to confirm or disprove history with a ghost.

The natural boundary the Prince mountain is known since very old time. The first written mention of it along with the village Rukhovichi belongs to 1563 - in audit of Kobrin economy. Subsequently it appears on the Russian cards of the 19th century and Polish the first half of the XX century. Having found the mountain on the Polish card of an interwartime when the Western Belarus was a part of the Polish state, we decided to find it independently, without addressing locals. And it worked well without special problems, though it was necessary to be guided in forest roads by means of the GPS navigator.

The prince mountain on the Polish card of an interwartime 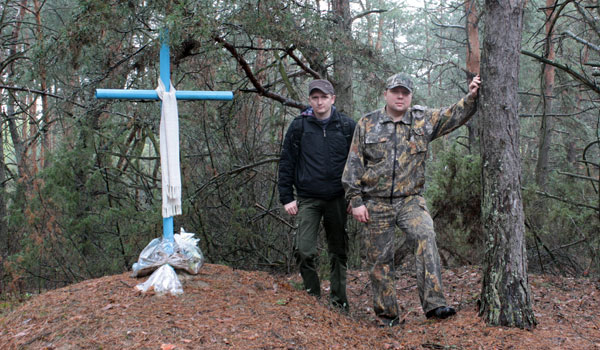 At mountain top quietly and peaceful

Top of the Prince mountain the metal cross on a small embankment at which bottom the remains from flower bouquets were based crowned. This cross was established in 1999, but as it appeared subsequently, at all not in that place where, according to local legends, ashes of the princess Olga have to be based. The former cross was wooden and stood much below on a mountain slope. The cross decayed, began to rot and as required it was shortened and driven more deeply in the earth. During the Soviet power it was destroyed at all. Now even old residents will find it difficult to specify the exact place of a prince grave. If earlier there was a naked place, and the mountain stood in an environment of bogs, then nowadays there everything overgrew a coniferous forest.

The legend says: "Long ago it was. The princess Olga passed here. There was it our, Russian … Once killed the husband it, Vladimir, and Olga went to be at war with enemies … Olga cunning won against enemies, having reforged at horses of a horseshoe on hoofs on the contrary. But for Dyvin there was a post, and from there soldiers caught up with it. At that time our mountain was above bogs, the wood on it was not. There the princess also stopped. Enemy troops came from the South, from Novoselok. On the mountain also found death Olga … There she was also buried".

Historical data are more avaricious on this subject. It is known only that Olga Romanovna, the granddaughter of the prince Michael of Chernigov, in 1263 married the vladimiro-Volynsk prince Vladimir Vasilkovich. After death of the husband on December 10, 1288 the princess according to the will received in possession the city of Kobrin with several villages. After 1290 Olga's tracks are in the history lost. What happened to it, it is authentically unknown. Maybe in memory of residents of neighboring villages around the Prince mountain echoes of real events really remained?

But first of all we were interested in a ghost. Whether really it wanders about the Prince mountain and frightens people? In a plot certificates of two eyewitnesses were shown. The first of them, Alexander Kreymer, allegedly faced the ghost relatively recently - a month before the carried-out shootings. According to him, it with the friend came back from rest, and they stopped at a roadside of the forest road. Unexpectedly Alexander heard some howl and saw the white spot similar to the woman's silhouette in white clothes. It was clear that he sees before himself something non-material. And here understanding that there are they near the Prince mountain came.

The second eyewitness - Irina Olekhno who came to these edges to stay for a while with relatives once. Having been chosen on mushrooms to the area of the natural boundary the Prince mountain, she met the woman there. At first was delighted: a pier if not one goes, so places here, really, can be mushroom. But then noticed that sees not the person at all. What is interesting, Irina was not frightened and went after her. But the ghost soon stopped and disappeared.

Let's logically not sort these avaricious certificates yet. The sense in it will be if it is possible to contact these eyewitnesses and to interrogate them more thoroughly. To look for them in neighboring villages it was represented useless as Irina was declared as coming, and Alexander could be the inhabitant of any settlement in the district. Therefore the sensible mind prompted to look for certificates on the ghost directly in the village shown in a plot. In transfer it was told unambiguously: "several centuries disturb residents of the village of Lyakhchitsa the ghost of neupokoyenny soul of the princess Olga Volynskaya". And if they protect themselves with effigies charms, so who as not they can tell more?

In Lyakhchitsakh it was succeeded to meet not so many people. Probably, on the Palm Sunday many went to church service to the nearest churches. But those to whom it was succeeded to talk puzzly shrugged shoulders when they were asked about a ghost. Anything similar here never heard about. The young girl from the house on that end of the village that is the closest to the Prince mountain, told that she saw transfer, but a story about neupokoyenny soul of the princess - a lie. Initial suspicions about falsification by the Russian journalists of all this history began to come true.

Eventually, our efforts were crowned with full success - it was succeeded to find one of direct participants of shootings of a plot (at her request, we do not call a name) and to meet the head of the village which was aware all interesting us put. As it appeared, journalists conducted shooting based on the legend about tragic death of the princess Olga, and also photographed several etudes on rural life. But subsequently the plot was not such at all, predictably. A story about the ghost terrorizing the village was shocking for its inhabitants. We were assured confusedly that no ghosts are found here, and asked to tell the truth that we also carry out.

With effigies charms everything was even more amusing. If at TV men they were urged to save the village from an importunate ghost, then in reality they carried out more prosaic function - function of a scarecrow. They were found on other end Lyakhchits (at all not in the road conducting to the natural boundary with a tomb of the princess) at two extreme huts in a depression in the ground between the yards and the road. About ten effigies from old women's clothing were attached to trees. As it was succeeded to learn, call their local "opolokha", and put to frighten off the birds of prey moved to hammer and drag off hens. Also there is no mysticism here. It would be strange to frighten off evil spirits it unusually. Also the fact that the princess Olga, memory of which is revered here, at the same time and afraid would be strange. 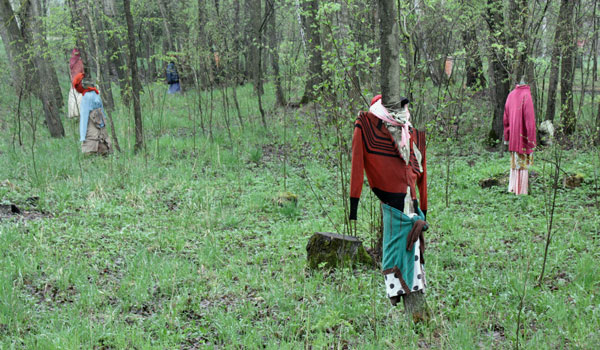 Thus, from all history with the ghost there is not clear only a situation with testimonies of the declared eyewitnesses. Their names were unfamiliar to the head of the village. Against everything that managed to be found out, and there is a wish to assume that figureheads could play eyewitnesses. But direct proofs to it are not available yet... only indirect. The only thing that can be told for certain - the Prince mountain has no ominous reputation at all. Moreover, in Council of ministers of Republic of Belarus the offer on giving to the natural boundary as to toponymic object of the status of historical and cultural value was made.

Article is reprinted from the website ufo-com.net
Author: Victor Gayduchik