The fountain which is absent

"Light strange time. "Thaw". Youth of our parents. The Yunost magazine with a thin girlish face on a cover. Bolon raincoats. An easy interior of apartments with an ottoman in a striped plaid, a vase "birch" and a print under glass on a wall", – so characterizes the first post-war decades the resident of our city Valentina Shokhalevich, and as if the recovered history, the fiftieth revive far... 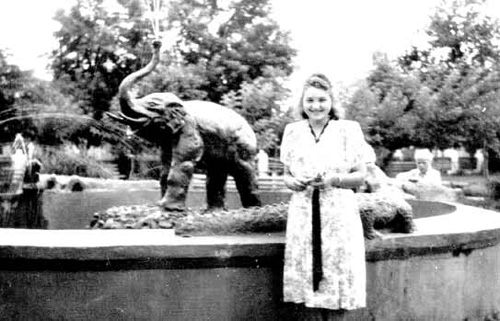 On a wave of the rise caused by a victory in the Great Patriotic War, the country entered a restoration era. Rose from city ruins, the industry revived, rough progress in economy was outlined. The Soviet Union came to the leading positions in the sphere of high technologies - the certificate to what start of the first satellite of Earth, start-up of nuclear power plant, the first flight of the supersonic passenger plane, creation of the electronic computer facilities which are not conceding to the American analogs.

Cultural life was in full swing not only in big cities, but also in small: young men read to girls verses to speak in love, Voznesensky and Akhmadullina were "very famous". Residents Kobrin visited families movie theater of "the 17th of September", there was in the city also a movie theater for children under the name "Satellite". On days off and holidays the youth walked in park. The square in the downtown with the fancy fountain which had quite strange story was other favourite place for walks.

"Rather young Suvorov Street which arose in 1766 under the name of Gubernialnaya was laid through a churchyard of the Peter and Paul church which staid on this place over 500 years, – the keeper of history of our city A. M. Martynov writes. – After war the square of Morozov was put here, and then the Recreation center is built". But the historian holds back that in the square several years prior to emergence of Recreation center there was a fancy fountain. In the early fifties it was the favourite vacation spot where in the summer evenings the youth gathered to sit in a cool shadow of trees, songs to the guitar sounded, and the easy breeze carried fountain splashes, moistening air and giving unique freshness to hot summer day. 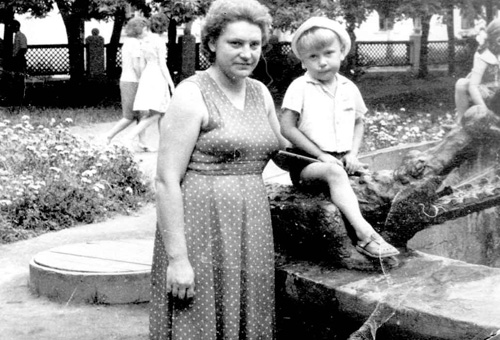 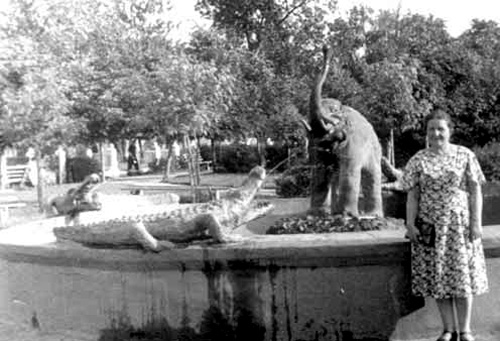 I peer at the old turned yellow pictures dated for 1953-56 on which the square of Morozov and the legendary fountain is imprinted. In the sculptural composition which is been the basis for the fountain "guests from tropics" stiffened in joyful mood: on a concrete socle 4 crocodiles whose of oskalenny mouths water streams beat, and in the center settled down, having lifted up a trunk, the elephant throws out water. However the unusual fountain which could become decoration of the city for some reason worked infrequently and existed not for long...

One of residents of our city M. A. Hoshvich told us that, being a child, it is frequent with the friends and schoolmates, younger school students of SSh No. 1, walked at this fountain. "In 1953-54 the square was enclosed with a wooden grill, the trees planted along it created a shadow, and from it in the square was very good and cozy", – Mikhail Antonovich tells. – Communicating with children of pilots, L. Gurtova and V. Baskakov, I learned that from height of bird's flight our fountain has the form of a fascist swastika. When I was on a visit at friends, often heard how adults discussed this news. Then we, children, with interest considered this sculptural composition. Really, something like the German cross could be seen, having even climbed up an elephant. We understood that someone quite consciously constructed it in such form". 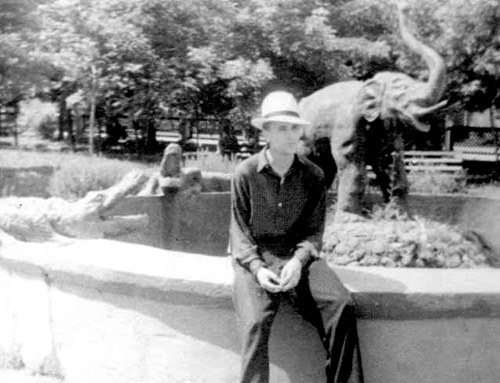 From conversation with old residents we learned that the fountain was built by the German prisoners of war involved in recovery work after release of the city from fascist aggressors. It is visible, power of nazi ideology was big if the soldiers of prostrate army expelled from the territories won by them left behind symbols of the subdued power.

When news of the fountain in the form of a swastika received a wide public response, the scandalous fountain by order of local authorities was reconstructed. "In 1957-58 crocodiles were moved away, having replaced them with frogs, but also kvakushka staid not for long: probably, all of them equally reminded inhabitants of the predecessors crocodiles and the related history. After frogs were moved away, the fountain in the middle still some time continued to work with an elephant, but it was already not that at all. Then, when construction of RDK on the place where there is a present Palace of culture was begun, the fountain was completely dismantled", – M. A. Hoshvich finished the story, and to me it was thought: "And ancient were indeed right, claiming that in the war all means are good".

Not one decade was required to our people to heal the terrible wounds left war in human hearts and souls. On a body of the earth numerous wounds in the form of funnels were also left, anti-tank ditches and unexploded bombs and shells which still are stored to this day in the subsoil by our distressful earth and from time to time throws up outside. Also "trophies" which do not shoot were left war and do not kill, but bear in themselves a reminder on "Fascism" – fascism. As the fates decree such reminder was left also in our city. So we refused one of its relics, but remained faithful to the moral and ideological principles.﻿