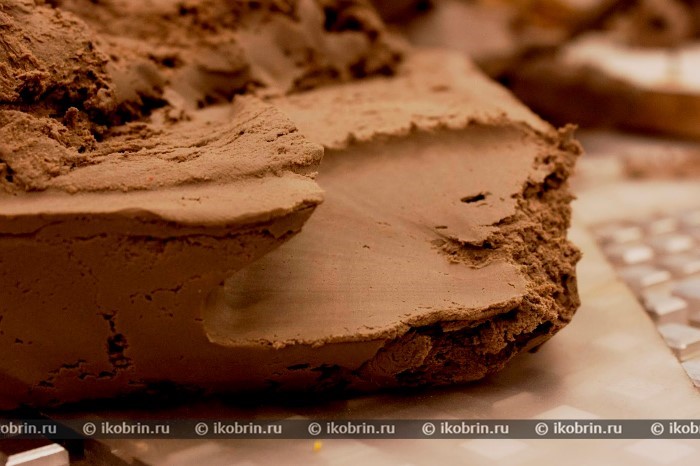 Clay- fine-grained sedimentary rock, dust-like in a dry state, plastic when moistening. Clay consists of one or several minerals of group of kaolinite (there is from the name of the district a Kaolin in China), montmorillonite or other layered aluminosilicates (clay minerals), but may contain both sandy and carbonate particles. Usually rock-forming mineral in clay is kaolinite, its structure: 47% (Mas) of oxide of silicon (IV) (SiO2), 39% of oxide of aluminum (Al2O3) and 14% of water (H2O).

Al2O3 and SiO2 - make considerable part of a chemical composition of glinoobrazuyushchy minerals. Diameter of particles of clays less than 0,005 mm; the breeds consisting of larger particles can be classified as the loess. The majority of clays - gray color, but meet clays of white, red, yellow, brown, blue, green, lilac and even black flowers. Coloring is caused by impurity of ions - chromophores, generally iron in valency 3 (red, yellow color) or 2 (green, bluish).

Origin. Feldspar at which disintegration under the influence of the atmospheric phenomena kaolinite and other hydrates of aluminum silicates are formed is the main source of clay breeds. Some clays of a sedimentary origin are formed in the course of local accumulation of the mentioned minerals, but the majority of them represent the deposits of water streams which dropped out on a bottom of lakes and seas. Clay is a by-product of crust, the sedimentary rock formed as a result of destruction of rocky breeds in the course of aeration.

Application. Potter's production. Clay is a basis of potter's, brick production. In mix with water clay forms the pasty plastic weight suitable for further processing. Depending on the place of an origin the natural raw materials have essential distinctions. One can be used in pure form, another needs to be sifted and mixed to receive the material suitable for production of various products.

Production of cement. For cement production at first extract limestone and clay from pits. Limestone (about 75% of quantity) is crushed and carefully mixed with clay (about 25% of mix). The dosage of initial materials is extremely difficult process as the content of lime has to answer the set quantity with an accuracy of 0,1%.

These ratios are defined in special literature by the concepts "limy", "siliceous" and "aluminous" modules. As the chemical composition of initial raw materials owing to dependence on a geological origin constantly fluctuates, it is easy to understand how it is difficult to maintain constancy of modules. At modern cement works well proved management by means of the COMPUTER in a combination with automatic methods of the analysis.

Correctly made slime prepared depending on the chosen technology (the dry or wet method, is entered into the rotating furnace (up to 200 m long and with a diameter up to 2-7 m) and burns at a temperature about 1450 °C - the so-called temperature of agglomeration. At this temperature material begins to be melted off (to bake), it leaves the furnace in the form of more or less large lumps of the clinker (called sometimes and portlandtsementny clinker). There is a roasting.

As a result of these reactions brick materials are formed. After an exit from the rotating furnace clinker gets to a cooler where there is its sharp cooling from 1300 to 130 °C. After cooling clinker is crushed with a small additive of plaster (at most 6%). The size of grains of cement lies ranging from 1 to 100 microns. It is better to illustrate it the concept "specific surface". If to summarize the surface area of grains in one gram of cement, then depending on thickness of a grinding of cement values from 2000 to 5000 cm ² will turn out (0,2-0,5 m ²). The prevailing part of cement in special capacities is transported automobile or by rail. All overloads are made in the pneumatic way. The smaller part of cement production is delivered in moisture and razryvostoyky paper bags. Cement on buildings mainly is stored in liquid and dry states.

Application in medicine and cosmetology. Most often in medicine and cosmetics use a kaolin. Clay is used in medicine, for example, clay is a part of some medical ointments, protivodiareyny means (in a preparation Neointestopan, etc.). In cosmetics clay is a basis of masks, some ointments. Medical clays and dirt are widely used in a kurortolecheniye of skin, gynecologic diseases, diseases of the musculoskeletal device. White clay can be used as antidote thanks to the sorbentny properties (parrots of macaw are known that they eat clay, thus, birds neutralize the toxins which are contained in unripe fruits).

Types of clay. Distinguish several kinds of clay. Each of them is used in own way. Clay with number of plasticity from 0,17 to 0,27 call easy, over 0,27 - heavy. The most part of the clays extracted and going on sale is made by a kaolin which is applied in pulp and paper industry and in production of porcelain and fire-resistant products. Materials, the second for importance, are usual construction clay and clay slate. Refractory clay goes for production of a fire-resistant brick and other heat resisting products.

The important place among types of clays is taken by bentonite. Consider that this clay was formed as a result of chemical disintegration of volcanic ashes. At immersion in water it inflates, increasing the volume several times. Generally it is used in boring solutions when drilling wells. Fulling clay is appreciated its bleaching properties at purification of oil products. Filters from fulling clay are used at purification of vegetable and mineral oils.

The potter's clay called also lump finds application at production of ware. Clay or clay slate represents important raw materials which together with limestone are used in production of a portlandtsement. Are the most widespread in the nature: red clay, white clay (kaolin), clay from sandstone. Clay grades - for production of porcelain, faience and fire-resistant products - a kaolin.