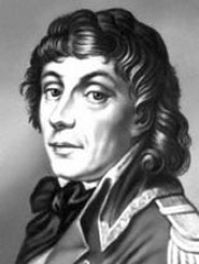 According to belarusky historians, the newborn child was christened in uniatsky church in the beginning (at the request of mother) and named Andrey in honor of the apostle Andrew the First-Called. According to the Polish scientists, and also the Swiss researcher Karl Falkenstein, Kosciusko called in honor of Saint Andrey Karsini whose day of celebration drops out for February 4. Two others of Kosciusko of a distance at the father's insistance in honor of the Saint Tadeush and Saint Bonaventuri who are widely marked out and esteemed by Catholic church.

Kosciusko's family belongs to a shlyakhta of a belarusky origin. Their entail property was in the village Sekhnovichi (nowadays Zhabinkovsky district) where the lime avenue according to the legend put by Tadeush remained. Tadeush Kosciusko got an initial education in Lyubeshov's board (1755-1759), then graduated from the Warsaw military school (1766) - the best educational institution of Poland of that time, and was distinguished from pupils with the abilities and extraordinary diligence, continued training in France (1769-1774). In 1768 his father, the cruel landowner, was killed by the peasants. It forced Kosciusko to ponder upon living conditions of the Polish peasantry to which his contemporaries, generally, paid not enough attention more deeply.

In 1769 Kosciusko was shipped at public expense outward and till 1774 stayed in Germany, Italy and France, being trained in engineering art. During this time finally there was its world view, because of sincere and deep hobby for ideas of the French educational philosophy. The freedom of worship, equal rights of estates, the democratic structure of the state - were that ideals which Kosciusko brought with himself home. Soon he had to learn by own experience in incompatibility of these ideals with a system of old Poland.

Having returned home, he was enlisted in the Polish army, but, submitting to the old customs allowing not noblemen to be pushed forward only at a patronage of some grandee, lodged at the old patron of his family, rich sir Sosnovsky. Training his daughters, Kosciusko was fond of one of them, Lyudvikoy, and she reciprocated to him. But Sosnovsky did not want and to hear about marriage of the daughter with the poor and not notable shlyakhtichy; also Kosciusko's plan to kidnap the girlfriend was not successful, and soon she married the prince Lyubomirsky at all.

Without seeing in the homeland of the appendix for the abilities, having lost hope for personal happiness, Kosciusko decided to leave the Polish-Lithuanian Commonwealth again and in the fall of 1775 went at first to France, and then, summer of 1776 to North America for participation in fight of the American colonies of England against their mother country.

In August, 1776 Kosciusko arrived to America and on October 18 was enrolled in a colonelcy. For seven years Kosciusko battled in the ranks of the American army. His knowledge as army engineer as troops were formed was especially valuable, generally from farmers and simple inhabitants and had the sharpest need for professional officers. Creation of the project and building of strengthenings on river banks Delyavyer for defense of Philadelphia where management of fight for independence was at that time concentrated was the first serious checking of his knowledge and talent. Kosciusko perfectly coped with a task.

In the spring of 1777 the main danger to Connected Shtatav hung from the North where the British acting from Canada and New York were going to crush insurgents. In this regard, according to the resolution of the Congress, the army of the North in which Kosciusko was appointed the chief engineer was created. Fortification constructions on the coast of the Hudson River, a citadel in Vest Point were constructed under the leadership of Tadeush Kosciusko. Thanks to military talent of Tadeush Kosciusko, the American army won one of the most important fights of that war which remained in the history in 1777 as fight under Saratogoy. The authority Kostyushki in America was how high, tell responses of the highest American heads. George Washington in the letter wrote the general Green in 1780 that he well got acquainted with Kostyushka and highly appreciates his knowledge, and persistence with which he carried out works to Vest Point. For outstanding merits the Congress of the USA gave on October 13, 1783 to it the rank of the brigade general.

For services in battle of Kosciusko it was awarded to the highest fighting awards of the USA - Tsintsinnat's award and accepted in members "Associations Tsintsinnatov" which honorary member was George Washington. The ground was allocated to it and the annual pension, and also as a special gift from Washington - pair of guns is granted.

At this time in the Polish-Lithuanian Commonwealth strongly the patriotic movement excited by the first partition of the country already ran high. Kosciusko, expecting to participate in revival of the fatherland, returned home where he adjoined party of liberal patriots. Admitted to the Polish army, with the general's rank, he in 1792 participated in protection of the constitution on May 3 against Russia and Targovitsky confederation, being in army of the prince Ponyatovsky and though his case was broken by excellent forces of Russians near Dubenkaya, but the general voice recognized Kosciusko as the only talented commander among the Polish military leaders of that time.

With joining of the king to Targovitsky confederation, Kosciusko retired and went to Saxony where the authors and the most jealous supporters of the constitution on May 3 who emigrated from Poland to avoid revenge targovichan gathered at this time. Here plans of destruction of results of the Grodno diet authorizing the second section of the Polish-Lithuanian Commonwealth, and independence restoration were formed them.

Kosciusko went to France, unsuccessfully trying to achieve from it the active help to Poles, was, on some news, and in Poland, even in Grodna, podgotovly revolt. Revolt broke out earlier, than his main inspirers when the general Madalinsky refused to dismiss, upon the demand of the authorities assumed, the crew and went through the Polish lands attached to Prussia to Krakow. Having heard about it, Kosciusko hasty went to Krakow. The nervousness which rose here at a message about his forthcoming arrival induced the Russian garrison to leave the city. In March, 1794 Kosciusko was proclaimed in Krakow by the chief of armed forces of revolt; power was entrusted to it to make the supreme national council, and also the right of court and execution of criminals for a temporary country government.

At the same time the serial commission of the Krakow voivodeship published the versatile person ordering to each city, the town and the village to put from 5 smokes in army of one person. The first Russian group sent against Kosciusko, under the command of the general Tormasov, was broken at the village of Ratslavitsakh, and Poles were mainly obliged by this victory to so-called kosinyer, that is the peasants armed with braids.

After this victory Kosciusko's popularity quickly increased. The Russian troops were forced out from Warsaw to which Kosciusko went. His hopes for revolt of all people supported with Ratslavitsky fight began to dissipate soon, however. The peasants who were going to army, having heard about oppressions of their families by landowners, began to run home. The Pospolity rushenye gathered hardly. The mass of the peasantry, prignetenny a serfdom, gloomy and mistrustfully looked at revolt, meanwhile as the majority of a shlyakhta and at this critical moment did not decide to renounce the landowner benefits and the rights.

Carried away by patriotism, Kosciusko decided to transcend those rights which were granted to him by the act of revolt and to involve national weight in business of restoration of Poland. The versatile person who is already published on May 2 in Vinyarakh demanded simplification of corvee for country families which members entered army, and on May 7 Kosciusko was published by the famous polanetsky versatile person whom he declared all peasants of the Polish-Lithuanian Commonwealth personally free people who are under the auspices of the law established court for the solution of affairs between them and landowners, provided them possession of the earth and for the period of revolt reduced their duties in favor of the landowner, providing a final decision of this question to future government.

Shlyakhta badly, however, executed instructions of the versatile person; actually peasants did not receive promised them a privilege and, with enthusiastic respect treating Kosciusko, did not support matter of revolt in that measure as he expected it. Affairs of revolt took more and more adverse turn.

At the beginning of July the Russian and Prussian troops went to Warsaw. Kosciusko hurried here and managed to occupy the city before allies. Undertaken then the siege of Warsaw by Prussians, under the command of the king, and Russians, under Ferzen's leadership, was unsuccessful. In September Prussians, having received news of revolt in Poland, receded, and then Russians departed from Warsaw also. But at this time from the South there was already to Warsaw Suvorov, and Ferzen, having passed Vistula, moved on connection with it. Kosciusko decided to prevent this connection and, having secretly left Warsaw in Serakovsky's case, barred Ferzena Way at the town Matseevichi.

On September 29 old style (on October 10) there was a fight in which the Polish army (7000 people) was broken into the head by 16-thousand Russian army and Tadeush Kosciusko was wounded in fight and taken prisoner by imperial troops. Captured Kosciusko was sent to St. Petersburg where he stayed in an imprisonment before accession to the throne of Pavel Petrovich. Released by the last, he in 1796 went to America from where in two years he was to France, at the call of Dombrovsky making here the Polish legions. Kosciusko, however, made out soon that the French government has at all no serious intention to restore Poland as his compatriots hoped, and evaded from participation in legions.

Later Napoleon, for excitement of Poles, used a name of Kosciusko, but without his consent and contrary to his desire as Kosciusko agreed to use the influence on compatriots in favor of Napoleon only under a condition of the solemn promise of restoration of the Polish-Lithuanian Commonwealth. After Napoleon Kosciusko's falling entered the intercourses with the emperor Alexander I and in 1815 had with it an audience. The Russian emperor showed great respect for the former leader of revolt in the Polish-Lithuanian Commonwealth.

Nevertheless, Kosciusko did not return to Poland, and spent the last years of life in Switzerland where he died in October 15, 1817, shortly before death having released the peasants belonging to it in Poland. Its ashes are transported from the city of Salyur (the canton Zolototurn, Switzerland) to the city of Krakow.