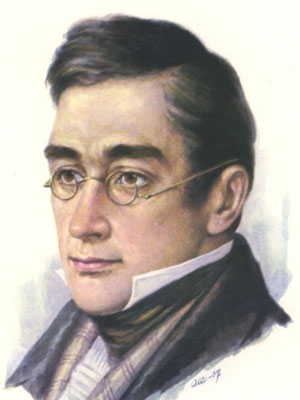 Russian writer, poet, playwright, diplomat. Alexander Griboyedov was born on January 15 (on old style - on January 4) 1795 (in some sources it is specified 1790) in Moscow, in an ancient noble family. "A noble family of Griboyedov - a shlyakhetsky origin. Jan Grzhibovsky moved to Russia in the first quarter of the XVII century. His son, Fedor Ivanovich, was the digit clerk at tsars Alexey Mikhaylovich and Fedor Alekseevich and the first began to be written by Griboyedov." ("The Russian biographic dictionary") the Childhood passed in the Moscow house loving, but capricious and unshakable mother of Alexander - Nastasia Fiodorovna (1768-1839) (Novinsky Boulevard, 17). Alexander and his sister Maria (1792-1856; in a marriage - M. S. Durnovo) got a serious house education: educated foreigners - Petrozilius and Ion were tutors, for private lessons professors of university were invited. In 1803 Alexander was defined in the Moscow Noble university board. In 1806 Alexander Griboyedov arrived on verbal faculty of the Moscow university which graduated in 1808 with a rank of the candidate of literature; continued training at ethic and political office; in 1810 ended legal, and then arrived on fiziko-matematichesky faculty. From the moment of training at university and for the rest of life Alexander Sergeyevich kept love to occupations by history and to economic sciences. Upon termination of training in education Griboyedov surpassed all the peers in literature and in society: knew French, English, German, Italian, Greek, Latin languages, later mastered the Arab, Persian and Turkish languages. In 1812, before invasion to Russia of Napoleon, Alexander Sergeyevich prepared for examination on the doctor's degree.

In 1812, despite discontent of a family, Griboyedov registered the volunteer - it was organized by a cornet in the Moscow Hussars gathered by the count Saltykov, but so far, Napoleon managed to leave Moscow, and then and Russia. War ended, but Alexander decided to prefer to career of the official a little attractive cavalry service in deaf back streets of Belarus. He spent three years at first in Irkutsk Hussars, then in a staff of cavalry reserves. In 1813-1816 served in Kobrin, Brest as the aide-de-camp of the commander of the reserve cavalry case, came to Minsk. Got acquainted with life and folklore of Belarusians. Here wrote the first works — "Young spouses", "About cavalry reserves", etc.

In Brest-Lithuanian where the cornet Griboyedov was attached to a staff of reserves and consisted the aide-de-camp at the humane and educated general from a cavalry A. S. Kologrivov, in it taste to books and creativity wakened again: in 1814 it sends to the Moscow "Bulletin of Europe" the first articles ("About cavalry reserves" and "The description of a holiday in honor of Kologrivov").

For Griboyedov there came times of the real hussar life: he boozed, was naughty, was dragged for women, poured jokes. But it was very scrupulous in relation to itself: did not allow either offenses, or sneers in the address. Once, when it served to Brest-Litovske, it drove on a horse on the second floor on a ball where it was not invited; another time got into the Polish church during church service and began to play on the organ. It played so that admired all, but at the kindest moment suddenly passed to "Kamarinskaya".

Having visited in 1815 St. Petersburg and having prepared the transition to board of foreign affairs, in March, 1816 Griboyedov retired. In 1817 Alexander Griboyedov was enlisted in Board of foreign affairs where soon began to be registered on the good account. In St. Petersburg its first plays were printed and put, it got acquainted with A.S. Pushkin, V. K. Küchelbecker, P.Ya.Chaadayevym. Official position of Griboyedov nearly spoiled his participation as the second in the duel of Sheremetev with Zavadovsky which revolted all with exasperation of opponents: according to some assumptions, after this duyula also duel between seconds had to take place. At mother's insistance to allow to settle to a gossip and to soften anger of the administration, Alexander Griboyedov had to leave temporarily St. Petersburg and to it, in spite of himself, the place of the secretary of embassy in Persia was provided. On March 4, 1819 Griboyedov drove to Tehran, but the considerable part served in Tavriz. Duties were simple that gave the chance strenuously to study Persian and Arab languages.

Periodically Griboyedov had to go with business instructions to Tiflis; once it took out from Persia and returned home group of the Russian prisoners who are unfairly detained by the Persian authorities. This enterprise paid to Griboyedov attention of the commander of the Russian troops in the Caucasus Alexey Petrovich Yermolov (1777-1861) who solved in it rare talents and original mind. Yermolov achieved Alexander Griboyedov's appointment the secretary by foreign part at the commander-in-chief in the Caucasus and since February, 1822 it began to serve in Tiflis. Here work on the play "Woe from Wit" begun even before appointment to Persia was continued.

After 5 years of stay in Iran and in the Caucasus at the end of March, 1823, having received holiday (at first short, and then prolonged and generally captured nearly two years), Griboyedov comes to Moscow, and in 1824 - to St. Petersburg. The comedy finished in the summer 1824 was forbidden by imperial censorship and on December 15, 1825 in the almanac F.V.Bulgarina "the Russian Waist" only fragments were published. For promotion of the ideas, Decembrists began to distribute "Woe from Wit" in tens of thousands of lists (in January, 1825 the list of "Woe from Wit" was brought also to Pushkin to Mikhaylovskoye). Despite the skeptical relation of Griboyedov to military plot of future Decembrists and doubt in timeliness of revolution, among his friends during this period there were K. F. Ryleyev, A. A. Bestuzhev, V. K. Küchelbecker, A. I. Odoevsky. In May, 1825 Griboyedov left St. Petersburg again to the Caucasus where learned that on December 14 Decembrist uprising got beaten.

Due to the opening of case of Decembrists, in January, 1826 in fortress Grozny Alexander Griboyedov was arrested; Yermolov managed to warn Griboyedov about arrival of the courier with the order immediately to bring it to commission of inquiry, and all compromising papers were destroyed. On February 11 he was brought to St. Petersburg and put on a guardroom of the General staff; among the reasons there was the fact that on interrogations 4 Decembrists, including S. P. Trubetskoy and E.P.Obolensky, called Griboyedov among members of secret society and in papers of many arrested found lists of "Woe from Wit". He was under examination till June 2, 1826, but since it was not succeeded to prove its participation in plot, and it categorically denied the participation in plot, it was released from under arrest with "the cleaning certificate". Despite this some time for Griboyedov secret supervision was established. In September, 1826 Griboyedov continued diplomatic activity, having returned to Tbilisi. In the Caucasus Ivan Fedorovich Paskevich (1782-1856) married to the cousin of Alexander Griboyedov - to Elizabeth Alekseevna was appointed the commander-in-chief (1795-1856). Griboyedov came back to the Caucasus reluctantly and seriously thought of resignation, but requests of mother forced it to continue service.

In the middle of the Russian-Iranian war charge to Griboyedov maintaining the relations with Turkey and Iran. In March, 1828 arrived to St. Petersburg, having delivered the Turkmanchaysky peace treaty, favorable to Russia, which brought it the considerable territory and big contribution. In negotiations with Abbas-mirzoy and signing of the contract Alexander Sergeyevich Griboyedov was directly involved. Concessions were made by Persians against will and Griboyedov, fairly being proud of the success, did not hide the fears of revenge and fast renewal of war.

In April, 1828 Griboyedov who had reputation of the specialist in the Persian affairs was appointed the plenipotentiary resident minister (ambassador) to Iran. Despite unwillingness to go to Persia, it was impossible to refuse appointment in view of categorically declared desire of the emperor. For years of service in the east Griboyedov got accustomed to east life and a warehouse of thought and the prospect of long life which opened before him in one of the centers of stagnation, arbitrariness and fanaticism did not cause in it special desire to start performance of new duties; to appointment it treated as a political exile.

On the way to the destination Griboyedov spent several months in Georgia. In August, 1828, being in Tiflis, he married the daughter of the friend, the Georgian poet and the major general Alexander Garsevanovicha Chavchavadze (1786-1846) - the princess to Nina Chavchavadze (1812 - 1857) whom he knew still the girl. Despite the fever which did not leave it and during a marriage ceremony, Alexander Sergeyevich, perhaps, for the first time felt happy love, enduring, according to him, such "novel which reserves far the most fancy stories of the fiction writers who are famous for the imagination". To the young spouse the sixteenth year just went. After recovery it took the wife to Tavriz and went without her to Tehran to prepare there everything for her arrival. On December 9, 1828 they saw each other last time. About tenderness with which it concerned the small "murilyevsky shepherdess" as he called Nina, tells one of the last letters to Nina (on December 24, 1828, Kazbin):" Invaluable my friend, feels sorry for me for you, is sad without you as it is impossible more. Now I truly feel what means to love. Before left with-legged to which it was strong attached too, but day, two, week - and melancholy disappeared, now the further from you, the worse. Let's suffer some more, my angel, and we will pray to god that to us after that never to be separated."

Having arrived to Tehran, Griboyedov acted sometimes in a defiant way, did not concede in anything obstinacy of Persians, persistently demanding contribution payment, broke etiquette of the shakhsky yard, showing the shah less respect is possible. All this became contrary to personal tendencies and the English diplomats used these mistakes to kindle hatred to the ambassador in court spheres. But more terrible hatred to Russians maintained by ecclesiastics was kindled in national weight: in market days dinned into ignorant crowd that Russians should be exterminated as enemies of national religion. An instigator of revolt was Teheran mudzhshekhid (the highest ecclesiastic) Mesy, and his main helpers - ulama. According to the official version drawing some loss of the Russian mission, but not slaughter was the purpose of plot. When in fatal day on February 11 (on old style - on January 30) 1829 about 100 thousand people gathered (according to testimonies of Persian dignitaries), and the mass of fanatics rushed to the embassy house, heads of plot lost the power over them. Understanding to what danger is exposed, a day before death Griboyedov sent a note to the palace, declaring in it that "in view of inability of the Persian authorities to protect honor and the life of representatives of Russia he asks the government about withdrawal it from Tehran". But was already late. Next day there was almost universal beating of Russians (the adviser of embassy Maltsov managed to escape only); Griboyedov's murder was especially brutal: his disfigured and spoiled body was
it is found in a heap of corpses. Alexander Sergeyevich Griboyedov was buried according to his wishes on David's the mountain in Tiflis - at Saint David's monastery. On a gravestone - Nina Griboyedova's words: "Mind and your affairs are immortal in memory of the Russian, but for what my love endured you?".