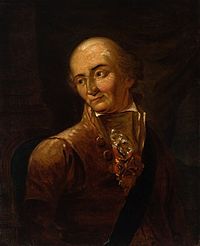 Anthony Tizengauz (1733-1785) came from the shlyakhetsky sort which had the German roots. Was born in a family of the rich and influential grandee Benedict Tizengauz. Got an education in Jesuit board in Vilno. Since 1764 the equerry Lithuanian. Since 1765 Lithuanian outdoor podskarbiya. The Grodno head at Stanislav Ponyatovskom. Held positions a podskarbiya of VKL, the Grodno head, administrator royal economy. The center of activity of Tizengauz were the city of Grodno and Postava. He corresponded with Jean-Jacques Rousseau, was a childhood friend of the last king of the Polish-Lithuanian Commonwealth Stanislav Augustus Ponyatovsky. On diet of 1764 the decision to transfer royal to economy to public administration was made. Podskarby VKL Anthony Tizengauz in 1765 carried out to them an agrarian reform.

On the Belarusian lands reform was carried out in the Grodno, Brest, Kobrin, Mogilev ekonomiya. It provided restoration of folvarok and improvement of technology of processing of the earth. Introduction of a chetyrekhpolny crop rotation due to expansion of crops of long-term herbs was offered. These actions had to increase the state profits which were planned to be enclosed in the organization of manufactories.

Reform began with audit of government-controlled lands. Depending on quality of the soil it was divided on good, average, bad and very bad. Then folvarka were organized. The peasant from the main plot (1/4 drag) carried out 2 days of corvee (in a week), 4 sgon (in a year), sharvarka, made monetary payments, delivered a natural tribute. Rural owners were allowed to take the reception earth on condition of payment of an additional chinsh.

In villages "municipal shops" — the general reserves of grain for members of a community were created. They were formed by collecting from each owner of different types of grain. "The municipal shop" allowed peasants to receive the help in a case of a crop failure, natural disaster or an impoverishment. Also in ekonomiya "municipal cash desks" were organized. The money raised from each smoke went on the general needs, for example on improvement of the village, compensation of the paramedic, doctor etc. The introduced regulations forbade peasants to accept in the houses tramps, "гультаев", infectious patients. They needed to protect the cattle from epidemic diseases. It was allowed to trade to peasants only in the state cities and places.

As a result of reform in ekonomiya the number of the peasants leaving corvee increased. Now the peasant had the right to transfer the plot to inheritance. Abuses of tenants of the state manors stopped. On the other hand, most of peasants did not accept reform as their duties before the state increased. It is confirmed by numerous complaints of peasants, their unwillingness to carry out corvee. For example, peasants of the Grodno economy in 1777 complained to the king of robberies of their farms managing directors of manors.

In 1766 to year Kobrin was deprived of the Magdebourg right, having become the usual agricultural settlement. Soon after that Anthony Tizengauz who for the purpose of increase of the income began reorganization of economy became the managing director of royal manors. It was required for the Kobrin key the new center as long time the Kobrin locks which were carrying out administrative functions finally grew decrepit, and their rooms became unfit for human habitation. In this regard in 1768 by order of Tizengauz in kilometer from Kobrin the estate was put (folvark) in which the management of the Kobrin key was located. Long reddening, connecting the city to the estate, began to be called Provincial (nowadays Suvorov Street in Kobrin). The farmstead one-storeyed house was located on the main axis behind ceremonial orchestra seats in the depth of park.

In 1770 — 1780 the Grodno head Anthony Tizengauz based a number of manufactories in the city and its vicinities: cloth, polotyany, weapon, chulochny, carriage etc. The city's first theater was opened for them. The failure of "economic miracle" of Tizengauz led to discharge it from management of ekonomiya in 1780.