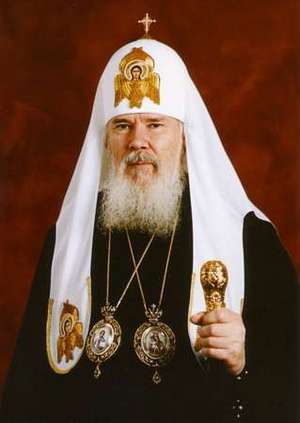 The most Saint Patriarch Alexy II (in the world Alexey Mikhaylovich Ridiger) was born on February 23, 1929 in the city of Tallinn (Estonia) in deeply believing family. It, the father Mikhail Aleksandrovich Ridiger († 1962), the native of St. Petersburg, was trained in school of jurisprudence, ended a gymnasium in emigration in Estonia, in 1940 ended three-year Theological courses in Tallinn and was imposed in the deacon, and then in the priest; within 16 years was a prior Tallinn Christmas of the Virgin of Kazanskaya Church, consisted the member, and later and the chairman of diocesan council. Mother of the Most Saint Patriarch is Elena Iosifovna Pisareva (†1959), the native of Revel (Tallinn).

Annually making pilgrimage in Pyukhtitsky Sacred and Uspensky female and Pskovo-Pechersky Sacred and Uspensky man's monasteries, parents took with themselves the son. In the late thirties parents together with the son made two pilgrim trips to Sacred and Preobrazhenskiy Valaam Monastery on Lake Ladoga that in many respects defined a spiritual course of life of future Patriarch.

Since the early childhood Alexey Ridiger served in church under the leadership of the confessor archpriest Ioann Bogoyavlensky, subsequently – the bishop Tallinsky and the Estonian Isidor (†1949); from 1944 to 1947 was the senior subdeacon at the archbishop Tallinsky and the Estonian Pavel (Dmitrovsky; †1946), and then and at the bishop Isidor. It was trained at the Russian high school in Tallinn. In 1945 it was entrusted to subdeacon Alexy to prepare for opening Alexander Nevsky Cathedral of the city of Tallinn for renewal of church services in it (the cathedral in military occupational time was closed). From May, 1945 to October, 1946 he was an altarnik and the sacristan of a cathedral. Since 1946 served as the psalm reader in Simeonovskaya, and since 1947 – in Kazanskaya Church of the city of Tallinn.

In 1947 arrived in St. Petersburg (at that time – † Leningrad) the Theological seminary which ended according to the first category in 1949. Being at the first year the St. Petersburg Spiritual academy, Alexey Ridiger was imposed on April 15, 1950 in the deacon's dignity, and on April 17, 1950 – in a curacy and is appointed the prior of Church of the Epiphany of the city of Jõhvi of the Tallinn diocese. In 1953 the father Alexy graduated from Spiritual academy according to the first category and was awarded degrees of the candidate of divinity.

On July 15, 1957 the father Alexy is appointed the prior of Assumption Cathedral of the city of Tartu and decent the Tartu district. On August 17, 1958 it is hailed the archpriest. On March 30, 1959 it is appointed decent the integrated Tartu-Vilyandisky deanery of the Tallinn diocese. On March 3, 1961 in Trinity Cathedral of Trinity-Sergius Lavra it is tonsured in a monkhood.

On August 14, 1961 to the celibate priest Alexy is determined to be the bishop Tallinsky and Estonian with an assignment to him of temporary management of the Riga diocese. On August 21, 1961 the celibate priest Alexy is hailed the archimandrite. On September 3, 1961 in Tallinsky the Aleksandro-Nevsky a cathedral the hirotoniya of the archimandrite Alexy in the bishop Tallinsky and Estonian is made.

On February 25, 1968 the archbishop Alexy is built in a metropolitanate. From March 10, 1970 to September 1, 1986 performed the general management of Pension committee which task was provision of pensions of clergy and other persons working in the church organizations and also their widows and orphans. On June 18, 1971 in attention to diligent works on carrying out the Local Council of Russian Orthodox Church of 1971 the metropolitan Alexy is awarded the rights of carrying the second panagia. The metropolitan Alexy carried out responsible functions as the member of the commission on preparation and carrying out celebration of the 50 anniversary (1968) and 60 anniversary (1978) of restoration of Patriarchate in Russian Orthodox Church; the member of the commission of the Sacred Synod on preparation of the Local Council of Russian Orthodox Church of 1971, and also the chairman of procedural and organizational group, the chairman of the secretariat of the Local Council.

Since December 23, 1980 he became the vice-chairman of the Commission on preparation and carrying out celebration of the 1000 anniversary of the Christianization of Kievan Rus' and the chairman of organizational group of this commission, and since September, 1986 – theological group. On May 25, 1983 it is appointed the chairman of the Responsible commission for development of actions for reception of buildings of ensemble of Danilov of the monastery, the organization and to carrying out all restoration and construction works on creation to its territories of the Spiritual administrative center of Russian Orthodox Church. At this position stayed before appointment on St. Petersburg (at that time – Leningrad) department. On June 29, 1986 it is appointed the Metropolitan of Leningrad and Novgorod with an assignment to operate the Tallinn diocese.

On June 7, 1990 on the Local Council of Russian Orthodox Church it was elected to the Moscow Patriarchal Throne. The enthronement took place on June 10, 1990. Activity of the metropolitan Alexy in the international field: as a part of delegation of Russian Orthodox Church participated in work of the III Assembly of the World Council of Churches (WCC) in New Delhi (1961); it was elected the member of the Central committee of VSTs (1961 - 1968); was the president of the World conference "Church and Society" (Geneva, Switzerland, 1966); member of the commission "Belief and device" VSTs (1964 - 1968). As the head of the delegation of Russian Orthodox Church "Arnoldskhayn II" (Germany, 1962), in theological interviews with delegation of the Union of Evangelic Churches in GDR "Zagorsk V" (Trinity-Sergius Lavra, 1984), in theological interviews with Evangelic and Lutheran Church of Finland in Leningrad and Pyukhtitsky monastery (1989) participated in theological interviews with delegation of Evangelic Church in Germany. More than a quarter of the century the metropolitan Alexy devoted the works of activity of the Conference of the European Churches (CEC). Since 1964 the metropolitan Alexy – one of presidents (members of presidium) KETs; on the subsequent general assemblies it was re-elected as the president. Since 1971 the metropolitan Alexy is the vice-chairman of Presidium and Consultative committee of KETs. On March 26, 1987 it is elected the chairman of Presidium and Consultative committee of KETs. On the VIII General assembly of KETs in Crete in 1979 the metropolitan Alexy was the main speaker on "— to Serve in Strength of the Holy Spirit to the World". Since 1972 the metropolitan Alexy is the member of Joint committee of KETs and the Council of Episcopal Conferences of Europe (CECE) of the Roman Catholic Church. On May 15-21, 1989 in Basel, Switzerland, the metropolitan Alexy was a cochairman of the I European ecumenical assembly on the subject "World and Justice", organized KETs and SEKE. In September, 1992, on the X General assembly of KETs, the term of office of the Patriarch Alexy II as the chairman of KETs expired. The Holy Father acted on the II European ecumenical assembly in Graz (Austria) in 1997. The metropolitan Alexy was an initiator and the chairman of four seminars of Churches of the Soviet Union – members of KETs and Churches supporting cooperation with this regional Christian organization. Seminars took place in Uspensky Pyukhtitsky convent in 1982, 1984, 1986 and 1989.

As the cochairman entered into the Russian organizing committee for preparation for a meeting of the third millennium and celebration of the two-millennium of Christianity (1998-2000). On an initiative and with the assistance of the Most Saint Patriarch Alexy II the interfaith conference "Christian Belief and Human Hostility" took place (Moscow, 1994). The most Saint Patriarch presided over conference of Christian interfaith advisory committee "Jesus Christ yesterday and today and for ever and ever the Same (Evr. 13. 8). "Christianity on the dawn of the third millennium" (1999); Interreligious peacekeeping forum (Moscow, 2000).

It was awarded by the highest award of the Russian Federation – the Order of St. Andrew the Apostle the First-Called, the award "For Merits before the Fatherland", many awards of Local Orthodox Churches and the state awards of the different countries, and also awards of public organizations. In 2000 the Most Saint Patriarch was elected the honourable citizen of Moscow, he was also an honourable citizen of St. Petersburg, Veliky Novgorod, the Republic of Mordovia, Republic of Kalmykia, Sergiyev Posad, Dmitrov.

The Holy Father it was conferred the national awards "Person of Year", "The Outstanding People of Decade (1990 - 2000) Promoting Prosperity and Glorification of Russia", "Russian National Olympus" and the honourable public title "Person era". Besides, the Most Saint Patriarch – the winner of the international award "Perfection. Benefit. Glory", awarded by the Russian biographic institute (2001), and also the Main award "Person of the year" awarded by Top secret holding (2002).

On May 24, 2004 the Most Saint Patriarch Alexy for outstanding merits in strengthening of the world, friendship and mutual understanding between the people was handed an award of the UN "The advocate of justice", and also Peter the Great's award (the I degree) behind number 001.

On March 31, 2005 the Most Saint Patriarch of Moscow and all Russia Alexy II was handed a public award – the award "Gold Star for Fidelity of Russia".

On July 18, 2005 the Most Saint Patriarch Alexy was handed an anniversary civil award – the Silver star "Public recognition" No. 1 "for formidable and selfless activities for rendering social and spiritual support to veterans and participants of the Great Patriotic War and in connection with the 60 anniversary of the Great Victory".

On July 26, 1995 the Patriarch Alexy II visited on a visit Belarus during which he visited Sacred Aleksandro - the Nevsky Cathedral of the city of Kobrin. 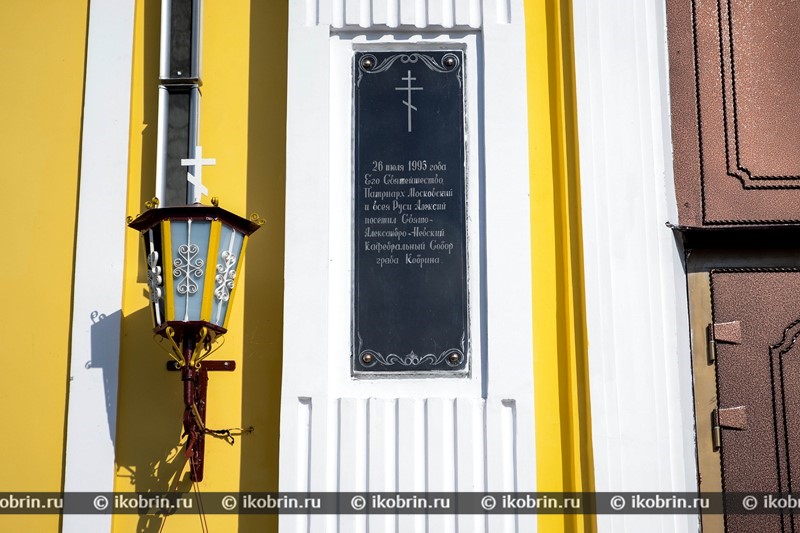 Board in honor of Kobrin's visit  by Alexy II