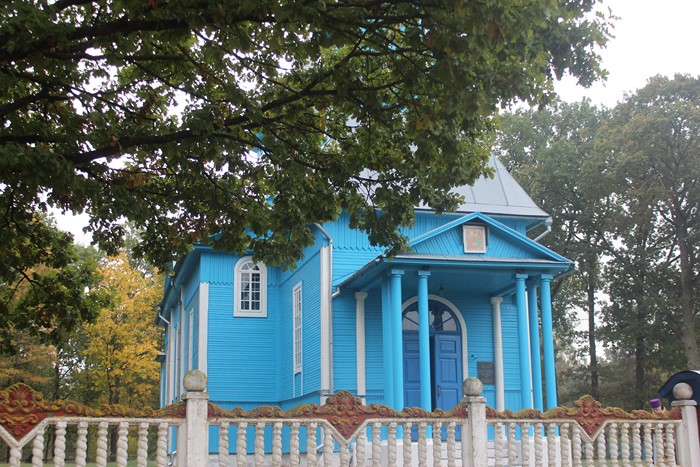 In life of each of us there are meetings. One bring joy, others – grief, we keep something in mind, and about something it is instantly forgotten. "Roads of Orthodoxy" we call our new project in which we will speak about the most long-awaited meeting for any Christian – a meeting of soul of the person good luck. Thanks to it temples are also built, gold "onions" concern dome heaven, bell-ringing is heard, souls change …

We suggest to go to travel across our Kobrin district. As it is nice, it is known to much. We as true travelers, we will try not just to admire beauty of temples, to enjoy cold spring water, but also we will try to open for ourselves what the belief our orthodox, from where its sources, vivifying for the person, is live.

… In the cool Sunday morning, chilly pulling shoulders, being christened at a threshold, we entered Kozishchensky Sacred Trinity Church with which decided to begin our travel. In the huge temple – several people, around – faces of icons.

Why we chose Kozishche? Residents of this village remained very little, all – people of deeply retirement age. Come to church services from the same small villages – Nice, Kamenka, Zauzhovya, Stasyukov … On average on service usually … 6-7 people. Are surprised? And now you are surprised even more. Quite recently in the temple finished repair – in three months. Many inhabitants and their relatives donated for building one million and more …

Are grandly christened during church service small parishioners. And once the temple was full of them here. Today the youth scattered who where, and old men in native Kozishche remained.

- The place at us fertile, – the 80-year-old parishioner Nina Fedoruk claims, – God stored. That this place it, we were convinced from the book "Cela Cozishche – 450 years" written in 2013 by two journalists, natives of this village Anatoly Gurin and Alexey Verush. This book opened for us interesting pages of history from temple life. It appears, originally on the place of today's church in 1805 it was constructed uniatsky, and in the 1879th of "old" church constructed "new" – already orthodox. The priest Lev Krechetov was a prior and the initiator of construction. All 43 years of the service he took care of spiritual and moral education of locals.

Data from archival documents where it is said that in 1880 orthodox parish to Kozishche made 1826 believers are provided in the book of kozishchensky journalists. The prior was the same year replaced, the father Lev's grandson – Anthony Ussakovsky became him. He actively was engaged in vicarial service, was also a religious teacher of local national school. By the way, Anthony Ussakovsky was Andrey Makarevich's famous to us great-grandfather, the head of Time machine ensemble.

For church 1914 became fatal – it was burned, and only in the 1927th here again heard bell-ringing. The next tests fell to lot of the temple and its prior father Ioann Kreydich (the son of serving to him and late lake of Nikolay) on the eve of World War II. Allegedly for anti-Soviet promotion it was sent for 25 years in camp from where it did not return any more. When war began, the service was started by the young priest Georgy Dembitsky. But also it was expected by a sad fate. In 31 years it was killed. Spiritually the father from the Birch began to nurture the deserted parishioners. During burial service of the father Georgi to stop service and to disperse people, foes rushed into church. The father did not obey. Soon there was no it also.

Since 1962 the temple served as a barn for grain. Then it was the only option to save church from destruction. In newly the consecrated temple in 1989 arrival was headed by the priest Vitaly Novosad.

- When the temple opened the doors, – we in the book Gurina and Verusha read memoirs of the lake of Vitaly, – parishioners did not hide tears of joy. The endured adversities only tempered their belief. And me, the young father, it was joyful to observe how literally from the first service people sought for the valid clarification of the soul. In process of spiritual growth they began to look more in themselves, to look for the reasons in themselves, to see the sins. From the first days I became the member of a big close-knit family. 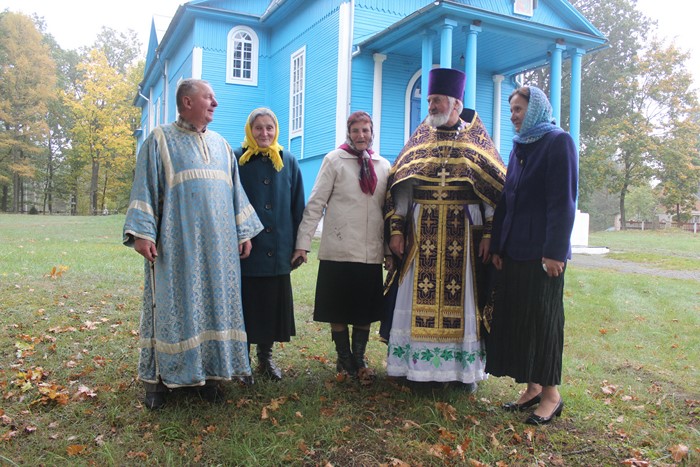 It is visible not for nothing our interlocutor Nina Fedoruk called this place fertile. Years of tests made, I will not be afraid of this word, the earth of sacred. For belief not one life broke here. And now in the temple on 6-7 people …

Long the father Alexy Kurishko (here 17 decided years as the dean) on repair – arrival is small, itself is frequent on hospitals. Thought and undertook.

- With the God's help of money collected. What people gave that from the savings, the decent pro-priest Bogdan Homa helped, the lord Ioann. As now I remember, repair was begun on March 28, and on August 6 finished. There were many problems, the roof proceeded, water dripped … 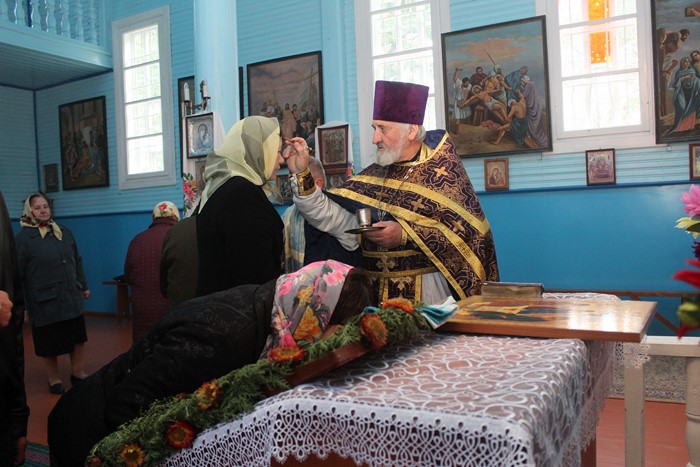 We could talk to the father after church service. In the temple somehow became warmer and on heart. The father Alexy, despite old age, many forces put on repair of church, went to Kozishche on building nearly every day. He is grateful to all who helped, especially to Valentin Dombrovsky. In process of forces also parishioners helped. Lidiya Nichiporuk, Anna Mishchuk, Maria Homenchuk, Vera Mikhasyuk, Nina Fedoruk – of course, pensioners not construction crew, maybe, their work was not so noticeable, but also they worked in God's glory much. 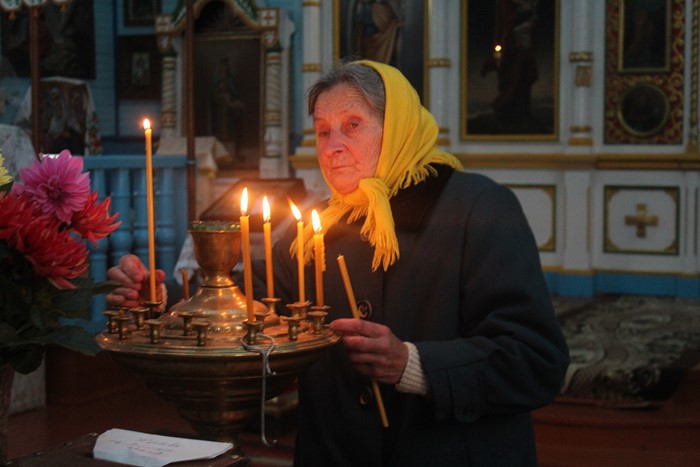 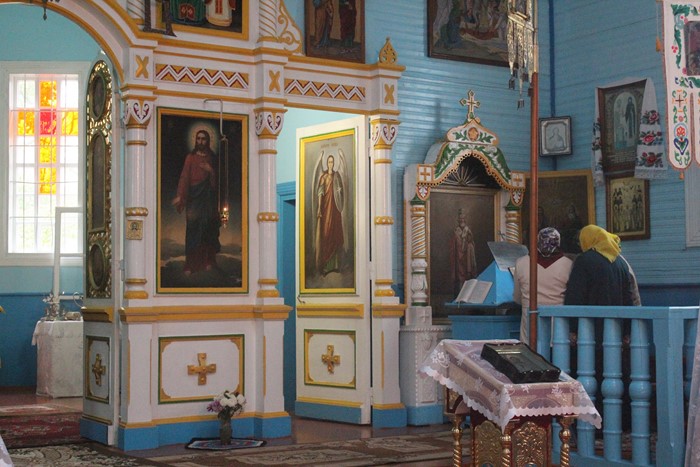 - At us though small, but amicable arrival, – Nina Vasilyevna notes. In three months replaced with efforts of people a floor, put walls, ceilings in order, made a blind area around the temple. The altar, domes, a belltower – everywhere tried.
- Of course, it would be desirable and to paint the temple … – the father pensively speaks. 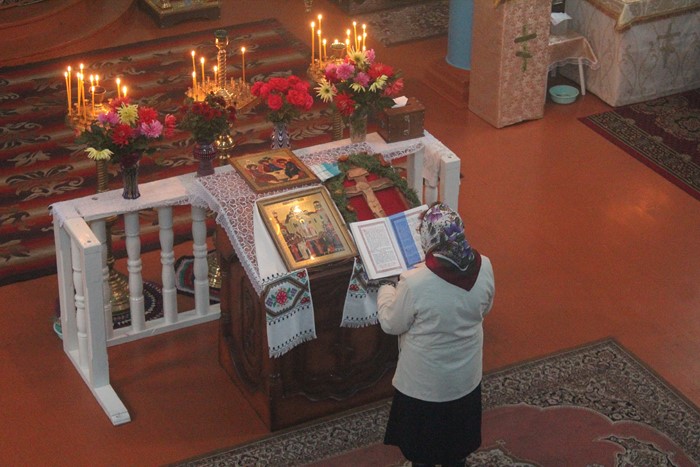 Having talked about "a daily bread", we asked the father Alexy a question that first of all it brings up in the parishioners what teaches to. What that answered:

- All of us should rescue soul. Because this life temporary and rapid, it flies by in a trice. We stand at a threshold of eternity and we do not know what waits for us …

Nina Vasilyevna Fedoruk on behalf of all parishioners asked to thank on pages of the newspaper the father Alexy for the fact that he did not leave their small arrival, did not leave the temple in desolation, and updated the God's house.

- Perhaps here some monastery will be arranged, if only on this place was sung to God, – the parishioner expresses the hope.

We got ready for a trip. The father blessed us, treated with prosphoras which he baked. And around pine aroma smelled sweet, the silence of shady trees attracted, and it was so easily breathed far from the noisy city. If you, dear readers, are in these regions, be not too lazy to curtail at the intersection to the right (on the left – an ostrich's farm known for much). Here, far from daily vanity, inhaling a special smell of fresh air, you will understand a lot of things …