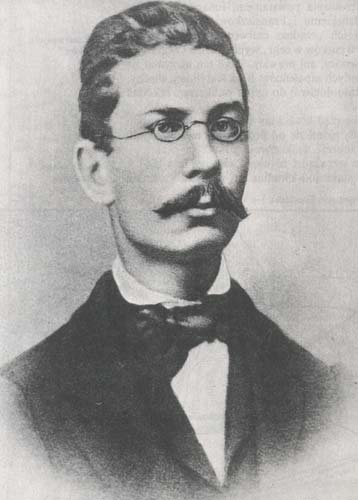 Future political and military figure, one of heads of revolt 1863-64gg was born (the 16th jelly of 1826). in of Shostakovo, the Grodno province, the Brest County (now the Kamenetsky area, the Brest region which was rented by his father Ludwik belonging to enough family of great antiquity Trauguttov, coming from Saxony (modern Germany). Mother of his Alois from Blotsky' family (owning Blot's manor).

At the age of 2 years Romuald lost mother (in 1828) then the family moved to. White (the Pruzhansky County, the Grodno province) and education the granny on the maternal line Yustina Blotskaya was engaged.

Ended a svislochsky gymnasium (existed from 1806 to 1851) in 1861 with a silver medalyom where very many offsprings of a beresteysky shlyakhta among them K. Nemtsevich, Kastus & Victor Kalinovskiye, V. Geltman, Napoleon Orda, T. Kraskovsky studied, and A. E. Chartoryysky popechitelstvovat to this institution. Generally a gymnasium those years — a smithy of revolutionary shots and the supplier of students for Vilensky university.

Then served in the Russian army the cadet in the 3rd engineer battalion billeted in 80 versts from Warsaw (occupational forces in general). In the spring of 1848 was entitled the ensign (those years officer). Same year there is the next misfortune — the father, and a bit later and "the byastsenny granny of Yustsina" as he wrote itself R. Traugutt on June 29 dies.

Then Traugutt is raised in a rank and in 4 years he marries the daughter of the Warsaw jeweler Anna Pikel already in the second lieutenant's rank (and it is already honourable). During service managed to participate in suppression of the Hungarian revolt (the Russian emperor helped the Austrian buddy) and to do some fighting in the Crimean war (1853-56gg.) with the young count L. Tolstoy and the surgeon N. N. Pirogov (at defense of Sevastopol). Later served in the Southern army and it was transferred to St. Petersburg.

In 1859 again misfortune in family Trauguttov: two children and the wife die. Still after a while the brother-in-law on the maternal line and Traugutt as the successor, becomes the owner of his manor in Ostrovye (Maloritsky district, the Brest region now) dies. While accepted inheritance (it lasted 2 years) lived in an inn of Mr. Kobrin. The lieutenant colonel retires and settles in Ostrovye already with the young wife Antonina Kosciusko (yes, the grandniece of Tadeush Kosciusko) and two children.

It would seem, rural measured life of the nobleman: hunting, parties of a local shlyakhta, occupation by physics (Traugutt's hobby), memoirs there everyones, all so if not events of 1863 … 22 jellies 1863 to fate Zhond Narodovy with the lead singer Stefan Bobrovsky published the manifesto and decrees on ownership of land, also requirements about democratization and independence and non-stop drove! Guerrilla groups in the territory of modern Lithuania, Poland, Belarus, Ukraine were created. Generally in February insurgents already took Pruzhana and moved to the pinsky woods (under Antopol).

At this time at the request of the doctor Pavlovsky and Elert's shlyakhtich, Traugutt breaks in the Detkovigsky wood (Pinshchina) where as the skilled fighting officer, directs training of insurgents in field camp at. Hills. The first fight brings a victory: losses of imperial army made 70 people, guerrillas — 1. After such "nespadzyanki" imperial troops, having collected reserves, arrange the most gloomy cleaning of the antopolsky woods. As a result of a strashneyshev of a mochilov from group there were only 43 persons with whom Traugutt decides to depart in the southern direction (to Volhynia). And the dez.information was started up that by Traugutt it is killed. Generally in the created funky conditions the idea to dismiss group ripened and on the single to leave to Bialowieza Forest. Sick and exhausted it came to the estate Lyudvinov where got acquainted with Ozheshko's family.

In July, 1863 by means of Heloise Ozheshko with lime ksivy, under the guise of the dying relative, he moves to Warsaw (saw Traugutt that revolt needs the good organization and strong "center"). Ozheshko's family paid expulsion of the owner of family to the Perm province where he also changed the worlds for this trick, and the manor was appropriated by the authorities.

Means 2 zhnivnya 1863 it is already chosen actually a revolt headliner then looks for the help abroad during the trips. Without special results comes home and decides to take everything in hand, coordinating the actions with K. Kalinovsky. Further there is an opinion that Traugutt shared views "white" more (generally about revival of the Polish state) while "red" Kalinovsky made more extreme observations (on the land question, about peasants, etc.). But in general men continued Kosciusko's business. It seems even many Russian soldiers (and in general, serfs) came over to the side of guerrillas. Till April, 1864 revolt during which Traugutt it was forced to take measures for movement radicalization, strengthening and streamlining of insurgent forces lasted, it is even possible to organize regular army (in total about 320 thousand persons participated in revolt). However finish...

In March Kalinovsky is executed, and in August (the 5th) Romuald Traugutt in the Warsaw Aleksandrovsky citadel was hung up (by the way, constructed by Nicholas I in 1834, we perestremavshitsya mighty well after revolt of 1830; curiously the fact that for stroitelsvo the tsar ordered to unfasten 11 million rublik to Bank of Poland for bad behavior in 1830). Revolt results (at first sad): 128 people are executed, 853 about 40 thousand are sent for penal servitude!!! it is sent from edge, 320 people are sent by privates to army (really already then shtraf.bat was?), about 1600 manors are confiscated (denzhishch darkness). Positive results — are liquidated the serfdom remains, the peasant reform is carried out, there was a strengthening of national consciousness on the Belarusian lands.

The family Trauguttov moved to m Klopotin (within Kobrin now) since the estate in Ostrovye burned by order of the authorities. Further it had to be taken out to St. Petersburg for their room (i.e. children Anna and Heloise) to institute of noble maidens in St. Petersburg (on "reforging" perhaps?). But they managed to be taken out under others names to Warsaw. The twist of fate is that the widow Traugutta (it is worth reminding, in Kosciusko's girlhood) married Alexander Mickiewicz (correctly you thought — the brother Adam Mickiewicz) and lodged in Kobrin, namely in the estate of the count A. V. Suvorov (who suppressed T. Kosciusko's revolt).

It is a little about memory perpetuating: in 1916 in Warsaw on the place of execution established a cross with a thorny wreath with the subsequent renaming of one of city streets. In 1933 the monument to R. Traugutt in Gorodtsa (Kobrin district) at the initiative of the Polish writer M. Rodzevich was established, later the monument was ryzrushen. Same year in of Ostrovye where lived and from where Traugutt, to 70-year anniversary of revolt left to be at war, from Kobrin there arrived the orchestra of the 8th regiment of R. Traugutt, and two living participants of revolt opened a monument in the form of an oak cross, with an inscription on a stone "for Romuald Traugutt — the great son of Polesia" (from these objects too nothing remained). In Brest till 1939 the elite gymnasium (the old case of pedagogical university) bore a name of Traugutt. 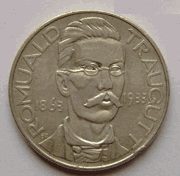 There are data on a monument to heads of revolt of 1863-1864 in Lviv (Ukraine) with the cut name of R. Traugutt. In 1928 the monument to the general Traugutt in the item of Svisloch (Grodno region) is open, and it was built to donations of local population, but on arrival of Red Army (it which is stronger than all), it was destroyed to a pedestal. Later half a century by efforts of local historians and enthusiasts it is restored (on the materials taken from archives). In the village of Shestakovo of our area the memorial board is established. Poles besides immortalized Romuald Traugutt on coins. About descendants: the daughter Anna gave rise and brought up three sons (with quite tragic destinies). Average — Adam died in the I World (battled in the Russian army), younger — Boleslav died in September, 1939 at defense of Warsaw. Anna died in 1938 Mr. Aloisa, without having left descendants, died early enough at the age of 50 years.