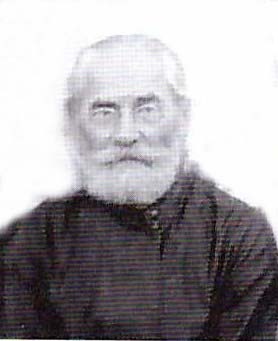 Anthony Petrovich Kotovich was born on June 9, 1881 in the village of Vezhka that in Kobrin district, in a family of hereditary priests. About this settlement there is a written mention dated 1597. Already then in the village there were two streets – Motyasovskaya and Pestenetskaya. Nearby in the landowner estate: brewery, ledovnya, svironka, bath, brovar. In the master's house not clay, but tiled furnaces.

And the first mention of the Vezhkovsky Orthodox church is dated 1668 when the Polish hetman Jan Sobessky approved the Charter of Vezhkovsky Church of the Assumption. In later time it is known that since 1868 Pyotr Kotovich, future father of Anthony about which we also talk, was a prior of this temple. 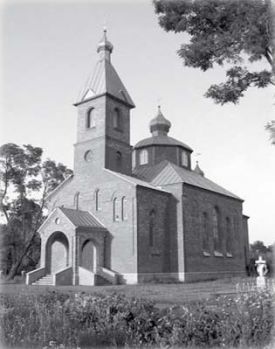 Probably the church of the village of Vezhka grew old and did not accomodate believers therefore in 1912 it was reconstructed. Also consecrated in honor of Ascension. By the way, already then in this temple there were two tiled ovens for heating of the temple. And all this magnificence, "having endured" World War I with its occupation by kayzerovets who in the temple suited hospital, burned down for the fourth day of Easter of 1943. The temporary church was constructed in 1947 as it appeared for the whole 53 years. For today on the same place stone church, three-dome with a belfry, which walls do not remember priests Kotovichey.

As the island Pyotr Kotovich long served in this temple, I do not know. But it is known that in later time it served in the temple of the village Stradech, nowadays Brest district. But it is known that his son Anthony ended the Lithuanian theological seminary (nowadays Zhirovichi) and in 1907 was a priest in the village Churchmen of Kamenetsky deanery of the Brest County. The son of the priest did not see for himself other way, except service to God and people.

I very long looked for the village Churchmen of the Brest County. And even thought of a mistake Nkvdistov in business on the lake of Anthony Petrovich Kotovich where about it, by the way, only several offers. An, no! Was not mistaken. It appears, at the second Councils, in 1964 this village because of "the dissonant name" was renamed into the village of Zarechana.

And from archive of "The Grodno orthodox and church calendar for 1899" I read: "Church in the village Churchmen wooden, with the same belltower. With a stone fencing. The church is built in 1793, parishioners. In five settlements: Churchmen, Koshchenniki, Monchaki, Svishchovo and Shostakovo – parishioners of 1626. In the village Churchmen are national school. There is a church farmstead house. At church of 49 tithes of the earth. In the villages of Koshchennika and Shostakovo there were parish schools". 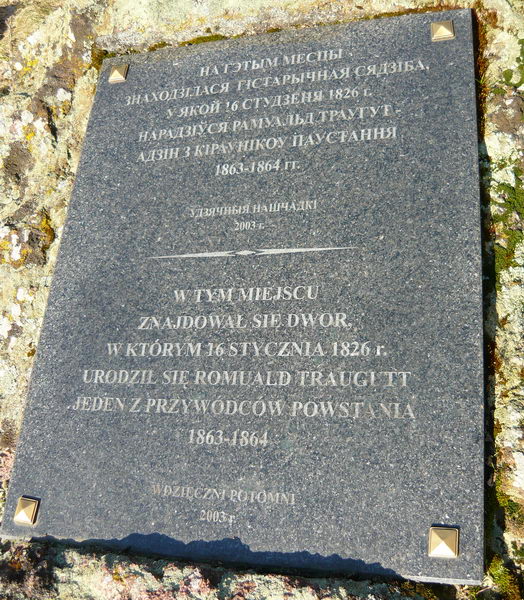 By the way, in the village of Shostakovo (Shestakovo) in 1826 future general Romuald Traugutt, the head of revolt against tsarism (1863-1864) was born. In 0,5 km from the village the monument, and in 1988 – a memorial sign is established to it. With approach of military events of World War I, the priest Anthony Kotovich with a family was evacuated to the Kherson province. It was 1915.

The further terrestrial way of the priest Anthony Kotovich, our fellow countryman was thorny. In the book "New Martyrs Russian" we read: "… The father Anthony lived in of Kukolovk, the Aleksandrovsky County, the Kherson province. Did not take any part in an obnovlenchestvo. Also it was appointed the second priest in Church of the Intercession". It was several times arrested in the matter of the first priest of this temple. Both of them refused to recognize Sergiya's declaration, the metropolitan Sergey Stragorodsky who cooperated with the Soviet power.

And when in Church of the Intercession the prior loyal to the power, the lake Anthony was appointed began to make liturgies at home, so serving believers. For it he was dismissed from the temple. And to the exarch of Ukraine metropolitan Mikhail (Ermakov) arrested for non-obedience. After imprisonment it was sent to Yeniseisk, Krasnoyarsk Krai, Siberia.

By the way, it was the "rendered habitable" place of political exiled, since Stepan Razin and Yemelyan Pugachyov's times. There in 1897-1900 in Shushenskom Ulyanov-Lenin lived in exile also. And if the tsar for Ulyanov's "discontent" left it in live and contained adequately, having allowed even to arrive the bride (Krupskaya), and allowed them to get married and live there adequately, then Ulyanov-Lenin's power for only disobedience, the three of People's Commissariat for Internal Affairs of 4.04.1938 of the lake of Anthony sentenced to execution. After wearisome works, physical and moral humiliation for more than a decade on March 27, 1938 it was shot.

Neither the grave, nor the district of a heinous crime, as well as millions of such exiled is known to us. Perhaps so far … Also did not meet to it – the lake to Anthony any "Dmitry Likhachyov" as to his brother-in-law of the lake Nikolay Piskanovsky who was equally injured for faith in God, and recognized as the hieromartyr as one list. But to everyone the destiny, the Cross.

We know that the mother of the lake Antonija Nina Feofilovna too was arrested, exposed more than once to tortures of GPU Alexandria. Then it was sent. Where it was sent, and its destiny and destiny of their children (if such were) – is unknown. But the fact that on November 14, 1981 ROCA (Russian Orthodox Church Abroad) made glorification of the Community of Saints of new martyrs Russian is known. And among 525 names also the name of the lake of Anthony Kotovich, on an annoying typographical error – Votovich appears.

Day of memory – the last Sunday of January. Spravochno. In July, 2007 the church in the Fatherland (Russia) reunited with Foreign ROC and the general lists of new martyrs began to be formed. Works are not finished yet.

Epilog (repentances and reconciliations)
I. I write this material for Orthodox community of the Brest region (if the destiny disposed to execute this mission to me) that we, live, stored and increased memory of the people, our fellow countrymen who shed blood and gave life for Orthodox belief. Thanks to their feat today we are living and we pray.

They in terrible conditions kept belief, protected culture. They in inhuman conditions remained people. They in the martyr way to the end carried by the Cross of Righteous persons. And we, fellow countrymen of the lake of Anthony Kotovich, feel his protection, in prayers calling it in the souls, kneeling down in the temple. And our prayers will be light and strong.

II. What represented the village Churchmen (since 1964 Zarechana)? Then now
Since the 16th century the village as a part of VKL, the property of the captain, nobody Nosarzhevsky. And from written sources of 1846 in the settlement of 26 yards and 185 inhabitants. And same owners. By 1890 already 45 yards and 300 inhabitants. On census of 1940 nearly 400 inhabitants lived in the village.

I will remind the reader that the church in the village was constructed by parishioners in 1793. She endured the Napoleonic epic, revolts of 1831 and 1863, October revolution, World War I. At departure to fleeing the part of church property was taken out to Russia (and nothing is returned), and part as it appeared, hid.

As the kayzerovets occupying our earth in 1915-1918 used the temple nobody knows, but the temple stood. And at return from fleeing people on the place of the village saw a bush and a tall weeds. But Pomala began to grow roots. Went to the temple, having found something from church utensils. But there was a trouble. Someone set fire to a tall weeds in the early spring. Fire was thrown on church. It burned down. It was in the spring of 1920.

Old residents of the village of Zarechana told me an interesting omen of this tragedy. All three days on easter vigil in 1920 in a corner where the temple icon of Uspenya of the Mother of God hung (from here it is necessary to assume, as the temple was Uspensky), people on service in the temple heard a plaintive church ring. Nobody understood anything and did not attach it special significance. Everything was understood after the fire.

So Churchmen (Zarechana) did not restore the temple of the village any more. Went to service to the neighboring village of Shostakovo where the local landowner gave the house where moved the remains of the rescued church utensils for church. And in the 60th years the temple in Shostakovo (Shestakovo) was closed. Icons transferred to the church of the village of Borshchovo (Borshchevo) bearing a name of Venerable Onuphrius and orally the mother Pelageya (so grateful parishioners immortalized a name of the landowner on whose money in 1840 this temple was built). 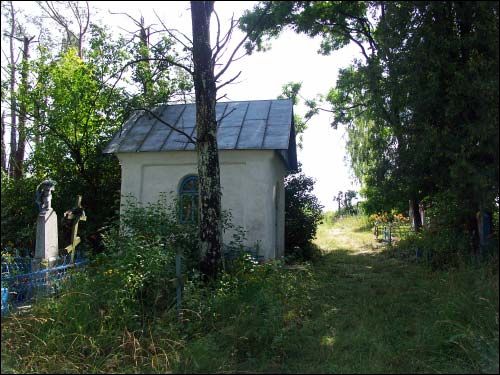 And still interesting information. Old residents of the village Churchmen (Zarechana) say that in the 60-70th years local boys on the place of the church which burned down in 1920 found several deep cellars in which found church values. But on it "unnecessary good" nobody then turned attention. And about about 8 years ago zarechansky parishioners in its altar part gave the place of the base of the burned-down Church of the Assumption Up as a bad job repentances and reconciliations.

There is in Zarechanakh on a local cemetery a small well-groomed kaplichka. Without name. The service happens there on wire Saturdays. The chapel is decorated ancient stone nadmogilya. Say about a kaplichka that "there was it always".