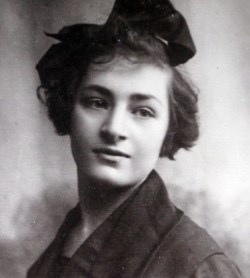 Polish sculptor, teacher and poet. Nearly in infancy having remained the orphan, already in the childhood opened in itself talent of the artist. Having ended the Brest gymnasium of Romualdatraugutt, came to Academy of fine arts in Krakow. Then taught in the Polish gymnasiums of Brest and Kobrin. National popularity was brought to it by Tadeush Kosciusko's bust established in Kobrin. After World War II moved to Poland. The author carried out the last twenty years thousands of sculptural works in Olsztyn where in her honor one of city streets is called.

Anyway, but it is necessary to recognize that slowly-little by little the mankind changes. Not always humane in life – in own family, in public transport, at work or outdoors, now and on the Internet, – we began to ask questions of the humane relation to everything more often that surrounds us. And all this, of course, well and remarkably. But there is also other party of a medal. Creation, so to say, of hothouse conditions for development of the person not always leads to desirable positive results. Often the person who since the early childhood learned bitterness of losses, vital drudgeries tries to obtain much just because the help has no place to wait that it is necessary to include some additional reserves of an organism, intelligence, talent. Alas, fight for a place in the sun or, simply telling, for a survival, nobody cancelled. And, apparently, it is hardly possible hopes for it. Not at ours, as they say, lives.

There is such phrase – I made myself. Here and today's heroine of "A family tree of the Brest region" had all reasons to say it. In our portrait gallery vital portraits of the Polish artists anyway connected with the Brest region were more than once exposed. It is possible to remember, for example, Erasmus Kalvariysky or Witold Turkevich's names creating fancy compositions from glass. Today – the sculptor Balbina Svitich-Vidatska.

Early losses
On March 31, 1901, in Mogilev, in Nicodemus and Maria Konarskikh's family the girl was born. Parents, for certain people devout, named her Balbina, in honor of the early Christian martyr on whom memory is made this day. Well, as you will call the ship, so it also will float. Spring – both year, and a new century. There is a lot of optimistic hopes and aspirations, not only in Konarsky' family. Expectation something new and fine soared in air, perhaps, of the whole world. And there was everything as before – troubles and tragedies fell one by one. Three years old the girl lost suddenly mother and the father. The benefit her uncle, the Catholic priest Vladislav Konarsky living in far Voronezh took to themselves on education the juvenile orphan.

But also there for a long time for some reason she was not late. Balbina's adolescence passed in the town of Borisovo near Kobrin, in a family of the aunt, former is married to local doctor Iosif Vitkovsky who had a manor here. They lived, apparently, rather richly, but it is lonely, they had no children.

But also there for a long time for some reason she was not late. Balbina's adolescence passed in the town of Borisovo near Kobrin, in a family of the aunt, former is married to local doctor Iosif Vitkovsky who had a manor here. They lived, apparently, rather richly, but it is lonely, they had no children.

From Brest-over-Bug to Krakow
The aunt's family really became Balbina native. Probably, people they were widely educated and uncommon. At first gave to the girl good house education, and then, in 1919 after Brest was a part of Poland, gave to study in the Brest gymnasium of Romualdatraugutt. And occupations by art creativity were in every possible way encouraged. For example, in 1922 it was allowed to arrange to young talent in the big house of a family of Vitkovsky extensive gallery of the works. And after the termination of the Brest gymnasium in the 1924th the question of where to continue education, probably, did not even rise. Only Krakow and local Academy of fine arts. Arrived and studied five years on a course of the remarkable sculptor and rector of Academy Konstantin Lyashchk. Also ended a course with honors.

Between Kobrin and Brest
Five years of life in one of the most beautiful cities of Europe, with the richest traditions of education and art culture. Training at the best Polish sculptor of that time. On hands an honors degree. Interesting question: what roused the young artist to return to the places which became for her the family? Love to a privacy, so desirable any artist? Thirst of educational activity and the related altruism, refusal of for the sake of some prime targets? Certain properties of temperament? For certain it had opportunities to remain in Krakow. Or early lost a family and found it in the aunt's family, she did not want to leave the family? Anyway, Balbina comes back to Kobrin. Teaches in a gymnasium of Maria Rodzevich the fine arts, heads a local scout movement. And in 1932 to it the first real success comes. Its work – Tadeush Kosciusko's bust gains national recognition. It was established in Kobrin on the place of a monument in honor of the first large victory of the Russian troops over Napoleon. (The bronze eagle in the 1920th completely disappeared, the pedestal was empty. Kosciusko's bust staid till 1951, then it appeared in the Brest museum of local lore, then was in funds of the Kobrin museum of Suvorov.

In 1935, participating in an exhibition in Pinsk, the artist gets a gold medal, and still after a while its sculpture of "Poleshuchk" was acquired on donations of the marshal Pilsudsky. In the same years she taught also in native alma-mater– of the Brest gymnasium of Romuald Traugutt. In 1938 Balbinusvitich (she married in the 1931st) awarded the state grant on a trip and continuation of training to Italy. World War II prevented to be carried out to plans for this trip.

To appear in the Soviet territory in the late thirties of the XX century too was pleasure below an average. Could happen to the person anything. At least could banish to Siberia. But whether the limit of a grief was reached, whether with art shots in again found territories was thin. Allowed to work. So, for just opened theater in Brest it executed busts of Chekhov and Stanislavsky, for the Minsk museum – Gorky and Tchaikovsky's busts, for the Minsk philharmonic hall – Chopin and Beethoven. During fascist occupation itself also survived and saved Jews from a Kobrin ghetto.

And after Auschwitz art is possible
But also this war ended. And, it appears, the artist somewhere in herself questioned, as well as Theodor Adorno: Whether "The poetry is possible after Auschwitz?". It turned out that yes, it is possible. Both in general, and it is concrete for her. 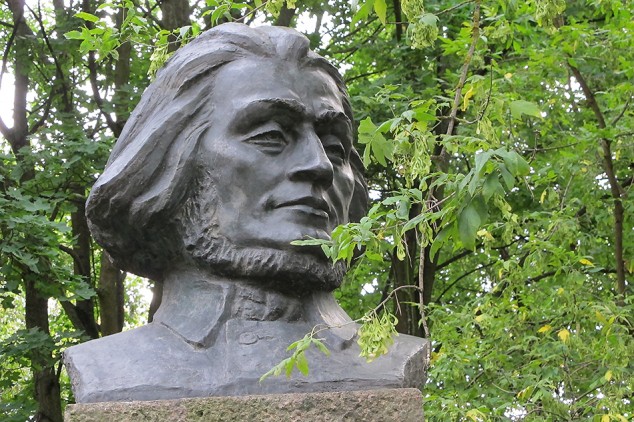 After war the artist moved to Poland. Some time wandered on the different cities in search of a haven. So far at last did not settle in the town in the north of Poland – Olsztyn. Here, by the way, settled many Polish families from the Western Belarus.

In Olsztyn she spent the last twenty years of life, from the 1952nd to the 72nd year. This edge is rich in lakes, one of the most picturesque regions of Poland and, perhaps too, the landscapes surrounding it reminded it of the years of youth spent to Polesia. She continued to model sculptures, many of which decorate Olsztyn and other cities of the country. Constantly participated in art exhibitions. Wrote verses, probably, more that is called "for themselves", but some nevertheless were published in periodicals and almanacs.

Art essence overcoming. The artist, especially the sculptor, overcomes material with which works. But even more significant for the artist is overcoming in itself human, an exit to some other heights. The sculptor Balbina Svitich-Vidatska also changed according to the lights and talent the image of the cities.